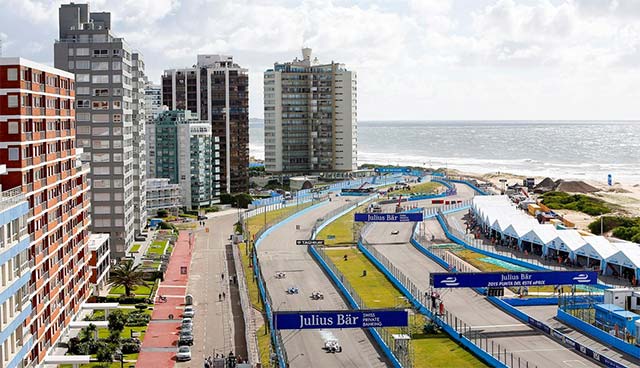 Season Four of the FIA Formula E Championship is underway after an exhilarating double-header in Hong Kong but, with another 12 rounds of all-electric street racing to come, we’re only just getting started.

With another 10 countries on four continents to visit, Formula E is destined for the streets of some of the most exotic cities in the world. Bringing all-electric racing back to established circuits such as New York, Paris and Berlin Formula E will be making a return to another familiar place – Punta del Este in Uruguay on March 17 2018. This was confirmed last week following the FIA World Motor Sport Council meeting in Paris.

Having played host to Formula E in Season One and Two, Punta del Este saw TECHEETAH’s Jean-Eric Vergne on pole in his first ever Formula E race in 2014 while Renault e.dams’ Sebastien Buemi took the top step on the podium. Season Two saw former champion Nelson Piquet Jn. crash out in spectacular fashion while Buemi held onto his title as the race winner for the second consecutive year.

Punta del Este takes the place of Sao Paulo in the season calendar, which has been postponed to Season Five at the request of the city’s authorities.

Situated on the picturesque Playa Brava Beach, the 2.785km course sees a return to Season Two’s track with 20 turns running the length of the seafront. “It’s the most unique track,” said winner Sebastien Buemi. “With a lot of quick, tight chicanes. It’s a very high-speed circuit, which I enjoy.”

With Marrakesh, Santiago and Mexico City before then, the teams will be looking to firm up their standings in Punta del Este as they approach the second half of the season. With driver’s like Mahindra’s Felix Rosenqvist and Venturi Formula E rookie Edoardo Mortara making waves on Hong Kong’s Harbourfront, it’s going to be all to play for in Punta.