The ultimate all-electric showdown: car vs. bike vs. drone [video] 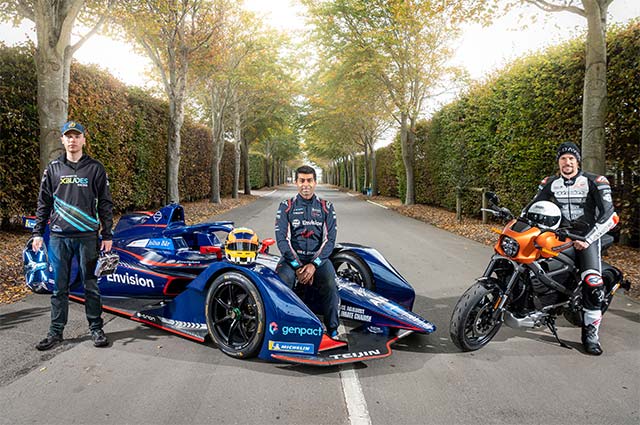 Envision Virgin Racing, Harley-Davidson and the Drone Champions League is some line-up, but which will be the winner in this supercharged cross-discipline contest around Goodwood’s historic race track?

Formula E laid out all the key stats to help you pick your winner, and once you’ve made your mind up, watch the video below to find out which of the Audi e-tron FE07, the Harley Davidson LiveWire and the DCL drone took the chequered flag first!

Envision Virgin Racing’s 2020/21 Gen2 Formula E car is a mighty all-electric competitor, capable of speeds up to 240kph. Designed to handle the championship’s calendar of tight, technical city centre street circuits, agility is its key trait, alongside bucket-loads of instantly-available torque which can launch the car from 0-100km/h in 2.8 seconds.

The car’s performance credentials aren’t in doubt, but weighing in at 900kg including the driver – Karun Chandhok, in this case – will its relative heft, in comparison to the bike and drone, prove costly around the Goodwood circuit?

Legendary motorcycle manufacturer Harley-Davidson has long been among the most recognisable names and one of the biggest brands in the industry, with a huge, loyal following and far-reaching renown.

The American marque has developed an all-electric motorcycle at the forefront of innovation; the LiveWire. The bike evokes that signature Harley sound and has the characteristic smooth ride and punchy acceleration to go with it – firing from 0-100kph in less than three seconds.

With twist-and-go technology, its electric powertrain means there’s no need for the rider shift gear or engage a clutch, so no slow-down in this race to the finish line!

This lightweight, cutting edge flier comes in at between 850-1000g fully charged and ready to race. The Drone Champions League racing drone takes to the skies as a strong wildcard competitor in this three horse race.

Built for extreme speed, agility and durability, the racing quadcopter is controlled directly by the pilot without the use of GPS or computer assistance.

Reaching speeds of over 160kph, these drones can fly for several kilometres in the right conditions, and with LiPo batteries that are easily swapped, the drone won’t be held back by power either.

How will it fare against it’s larger competitors?