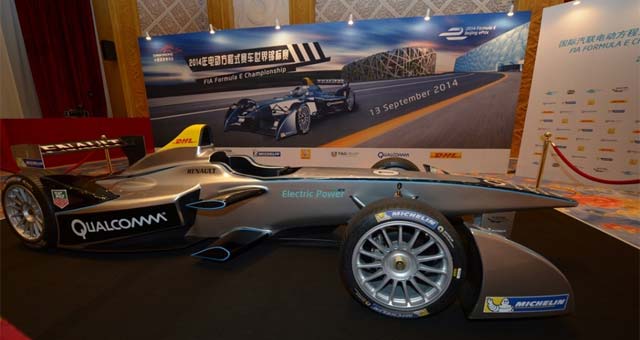 For the Beijing ePrix, Hanergy will install its customised rapid deployment solar power system throughout the event area to provide part of the total energy requirements needed for the race – converting sunlight to clean solar energy with the highest efficiency under limited space, time constraints and varying weather conditions.

Formula E is the world’s first fully-electric motorsport series competing on 10 city-centre street circuits around the world, beginning on September 13 2014 in Beijing racing around the iconic Olympic ‘Bird’s Nest’ Stadium. It features 10 teams, each with two drivers, and is designed to appeal to a new generation of motorsport fans, whilst increasing the interest in electric vehicles, clean energy and promoting sustainability.

Mr. Zhou Jiesan, Executive President of Hanergy Global Solar Power & Applications Group, subsidiary of Hanergy Solar, said: “Formula E conveyed an extraordinary idea of converging energy, environmental protection and entertainment in a car race, and Hanergy Solar is proud to take part in the event by providing clean energy with our leading flexible thin-film solar technology in the world. Over the past years, Hanergy Solar, with technological innovation and R&D on customisation solutions, has been working together with various business partners from around the globe to develop electric automotive power supply, storage and the surrounding photovoltaic system applications. Hanergy Solar, as the world’s number one thin-film solar technology enterprise in terms of scale and technology, will seek further cooperation with new-energy automotive manufacturers to promote electric vehicles.”

Alejandro Agag, CEO of Formula E, said: “We expect Formula E not only to bring excitement but also serve as a platform for R&D of electric vehicles. We are impressed by the advantages of the thin-film solar technology of Hanergy Solar and our partnership with Hanergy Solar will be instrumental in promoting electric vehicles and the use of sustainable and efficient electric energy. It will also raise awareness of environmental protection and will thus be conducive to the sustainability of the community.”