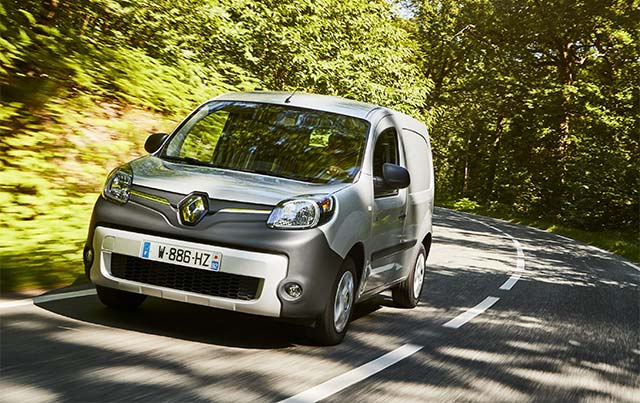 New Kangoo Z.E.’s driving range marks an increase of over 50 percent, which means it can cover even more ground than its predecessor, reaching 270km over an NEDC cycle (1) (equivalent to 200km real use in summer) compared to 170km previously. A new battery mated to a new motor and the incorporation of a heat pump combine to produce the best driving range in the electric LCV (light commercial vehicle) market. 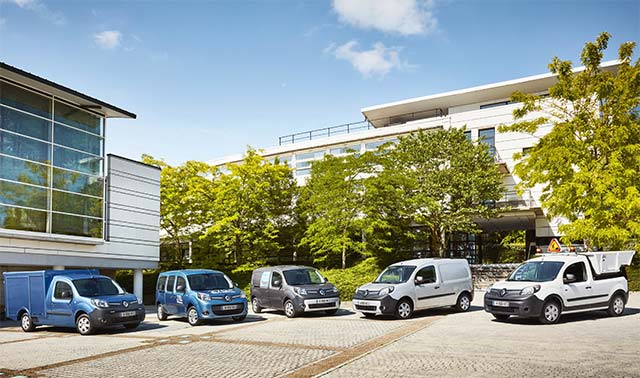 A new, twice-as-powerful charger enables the vehicle’s battery to be fully charged in as little as six hours (easily possible overnight), whilst a one-hour lunch break allows enough time to add a 35-kilometre top-up, helping users to make optimum use of their working day. New connected services, Z.E. Trip and Z.E. Pass, simplify the charging process at public charging stations across Europe, which in turn eases day-to-day life for LCV users.

Kangoo Z.E. has topped the European small electric van market for the past six years, achieving sales in excess of 25,000 units since its launch in October 2011. New Kangoo Z.E. is built in France and will be available in Europe from mid-2017. 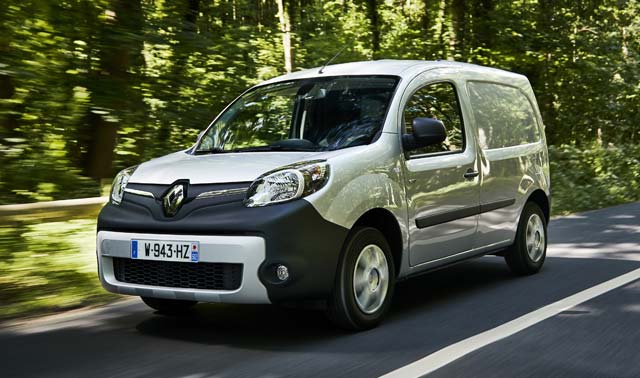 NEDC driving range extended by more than 50 percent to 270km
New Kangoo Z.E. boasts four major new innovations: a new battery, a new motor, a new charger and the incorporation of a heat pump for the climate control system.

New Kangoo Z.E. duly offers unrivalled driving range in the LCV market, achieving 270km over an NEDC cycle – a significant improvement over the 170km of its predecessor. In real-world use as a delivery vehicle (), this corresponds to a range of between 120 and 200km on a single charge (depending on the type of terrain, temperature, wind, driving style, etc.) compared to between 80 and 125km previously. 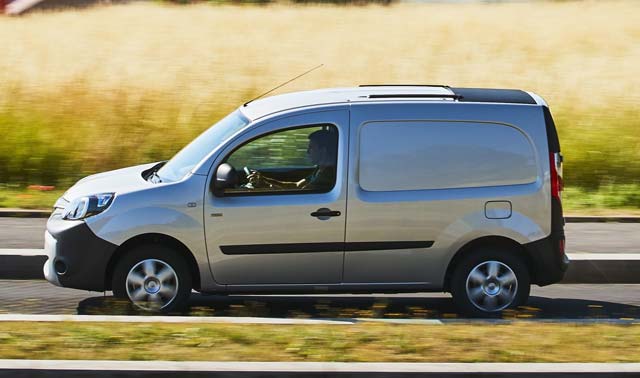 New Kangoo Z.E.’s extended driving range owes much to its new 33kWh ‘Z.E. 33’ battery. Developed thanks to the combined expertise of Renault and LG Chem, this new battery features a significant innovation: upgraded energy density which means its storage capacity has been increased without any changes to its bulk, so the vehicle’s load carrying capacity is unchanged. Battery performance has been optimised not by adding extra modules but rather by improving the chemistry of the battery cells themselves in order to increase energy density. This major improvement was achieved with no trade-offs in terms of either reliability, safety or payload.

New Kangoo Z.E. also benefits from a new energy-efficient motor and an optimised electronic battery management system, which limits the electricity consumed by the vehicle during road use, with no detriment to power output. The all-Renault R60 motor delivers 44kW (60hp) and is based on the R90 motor that also powers ZOE.

It is manufactured at Renault’s Cléon plant in France, the Group’s flagship facility for the production of high added-value engines, motors and transmissions. 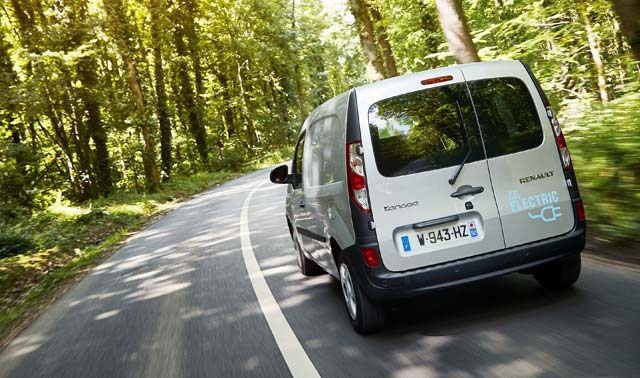 Charging New Kangoo Z.E. is now faster courtesy of a new charger that is twice as powerful and even more user-friendly thanks to an upgraded range of connected services to facilitate everyday life for electric van users. The new charger boasts twice the power capacity to charge the battery fully in six hours (much less than a night). It can also top up the vehicle with 35 kilometres of driving range in mild weather in just one hour (during a lunch break, for example) to deliver a valuable productivity boost. Meanwhile, new Renault Easy Connect connected services, Z.E. Trip and Z.E. Pass, further simplify charging at public stations across Europe to optimise working day schedules. 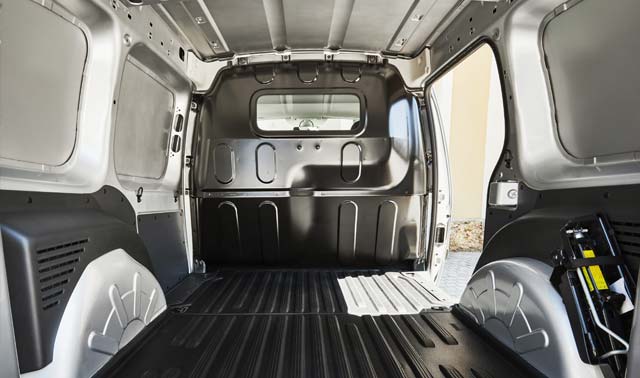 A new charger with twice the power capacity for faster charging
New Kangoo Z.E. is equipped with a new-generation single phase 7kW (32A, 230V) AC charger. It can now be charged faster and reaches a full charge in around six hours when plugged into a 7.4kW WallBox, instead of seven hours previously, yet driving range has been increased by 50%. New Kangoo Z.E. can be topped up with 35 kilometres of driving range in one hour (in temperate zones). That’s the equivalent of a standard lunch break, or the time it takes to load the vehicle with goods before heading off on a fresh delivery run. 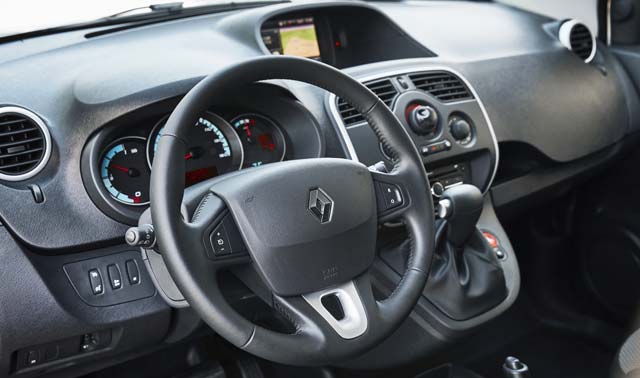 Incorporation of a heat pump: a first for an electric LCV
– New Kangoo Z.E. comes with another real innovation in the realm of electric light commercial vehicles, the incorporation of a heat pump in the climate control system to maintain driving range even in cold weather.
– This heat pump improves the driving range in cold conditions by restricting the use of electrical resistors that consume both power and range.
– New Kangoo Z.E. is the world’s first LCV to be equipped with this feature.
– By using the pre-conditioning system (the trigger time of which can be adjusted via the vehicle’s steering wheel-mounted controls), New Kangoo Z.E. can be heated in advance when plugged in, or cooled (provided it is equipped with climate control).
– What’s more, New Kangoo Z.E. is even capable of catering for the very coldest of climates thanks to the availability of an additional, independent fuel-powered mini heater unit that makes sure users stay comfortable in extreme conditions and that driving range is not impaired by very low temperatures.

Equipment (EVSE) market will make up three quarters of the installed units over the next five years but public and workplace segments will make up the majority of the revenues. There are 14 commercial EV charging market segments in North America that ON World analyzed.  Installations at workplace sites increased 77% last year compared with 65% for all market segments combined.  Over the next five years, the fastest growing markets will be the workplace, fleets, government and hospitality.

In 2022, there will be 1 million EVSE connectors installed in North America.  EV chargers in private locations such as residences, multi-tenant buildings and workplaces will increase by 955% from 2016, nearly two times faster than public locations such as malls, rest stops, hotels, groceries and convenience stores.

ON Word’s recently published report, “Electric Vehicle Smart Charging,” is based on 2,100 interviews and surveys with all major stakeholders along the EV charging ecosystem, an in-depth value system analysis and intellectual property evaluation.  It includes 6-year forecasts for EVSE hardware as well as associated services, the results of two 2017 surveys, an evaluation of 2,200 patents for the top 25 patent holders and profiles for 50+ companies.