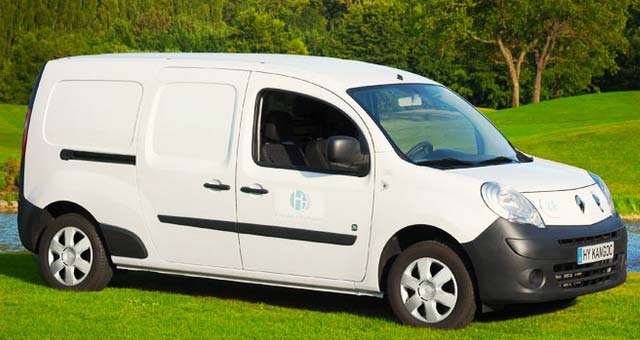 Symbio FCell has launched the first five new hydrogen powered Light Commercial Vehicles equipped with the Symbio FCell Range-Extender, as part of a venture directed by the Conseil Général de la Manche, whose ambition is to pioneer the green hydrogen production and distribution in France.

La Manche indeed counts amongst the first departments in France to own a hydrogen filling station (active in Saint Lo) and five plug-in hybrid battery fuel cell light vehicles. Furthermore, it has an important potential for low-carbon electricity production, based on marine renewable energies (hydrokinetic and offshore wind) and nuclear.

The Conseil Général de la Manche aims to put on the road a total of forty hydrogen-powered Renault Kangoo ZE utility vehicles equiped with the Symbio FCell Range-Extender. This technology recharges the battery when it drops below a certain level and permits the vehicle to be refueled with 1.8kg of hydrogen, 1kg of which powers a distance of over 100km; the range-extender therefore almost doubles the daily range of battery powered vehicles, a significant improvement that makes hydrogen-powered electric vehicles more competitive in the automotive markets.

Symbio FCell provides mobility solutions based on the conversion of hydrogen to electricity thanks to PEM Fuel Cell systems, powering from 5 kW to 300 kW still remaining zero emissions. These solutions can be integrated in a large panel of applications and are well adapted to road vehicles, fluvial boats and other types of platforms with intensive usage cycle in urban area.

Fabio Ferrari, CEO of Symbio FCell, comments: ‘The ‘Range-Extender’ increases both driving range and availability of Electric vehicles for commercial usage, while reducing the investment in battery recharging infrastructure for large fleet. Closer to a traditional ICE vehicle, this ensures seamless operations for professional intensive urban usages as demonstrated in previous experimentations such as La Poste’.