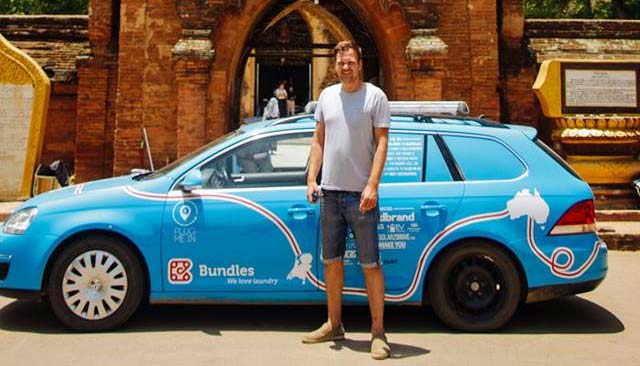 Imagine crisscrossing the world in an electric car without any money, your route being determined by anyone willing to provide you with food, shelter and a chance to recharge your vehicle. Far-fetched as the idea may seem, that is what a 30-year-old Dutchman, who is currently passing through Myanmar, is doing.

The adventurous Wiebe Wakker, who set out for Australia from the Netherlands on March 15, 2016, arrived in Myanmar from India last Wednesday as part of a unique global mission to promote sustainability in daily life and showcase the advantages and possibility of covering long distances in electric cars.

Wakker’s website plugmeinproject.com offers people the opportunity to support him with energy. So far more than 1,000 people from 40 countries and 5 continents plugged him in. The route is decided upon this generosity, zigzagging Wakker across Europe. He became the first ever to cross the Middle East by electric car and now, 457 days later, Wakker reached Myanmar.

Until last week it was not sure if Wakker could complete the road trip through India as he faced problem after problem. It started with a broken coil spring and later his car got detained by the Bangladeshi customs which forced him to return to India and drive around Bangladesh instead. A race against the clock began as the entry date for Myanmar was fixed and the monsoon season would hit. With his modified electric station wagon this would become a dangerous journey.

What seemed to be a big problem became the least of his worries as his 3-phase charger got destroyed and the lower arms worn out. His car had to be transported to the nearest city by truck but drivers didn’t have the right tools to offload the car in Guwahati and it took 3 days before Wakker found a train station from where the car could be offloaded. After 8 days in Assam’s capital the journey continued.

Many people reached out for help, both offline and online. Locals helped him find a truck to transport the car. In Guwahati people offered him a place to stay and assisted him with finding a solution to offload the car. Through social media people gave tips, some even made technical drawings with calculations how to get the car down from a 1.20 meter high platform. “The help that I received is heart warming and it made me realize I am not doing this alone.” Wakker says. “I came a long way to India and this was the first time I encountered problems of this size, but I made it and feel stronger to reach my end goal – Australia.”

On the 14th of June, Wakker reached Myanmar. “This country is not well-known to most people and, like I did before, I want to show my followers the culture, landscapes and spirits of the country.”  Wakker says. The solo-traveler is sharing his experiences on social media and has gained thousands of followers on his journey.

Plug Me In’s mission is to raise more awareness on electric vehicles and sustainable living. Taking locals for testdrives to show the benefits of driving without fuel. Many people believe electric cars and not ready for daily use yet but Wakker shows the contrary. “Through fun and excitement I am showing that electric cars are ready for the future. They are fast, silent and the range is already enough for people to use it for daily activities.” Wakker states. In all the countries Wakker crosses he speaks with governmental organizations and gives lectures about sustainable mobility at universities and embassies. Videos and reports about these encounters can be seen on his website and after the journey a documentary will be made about his findings.