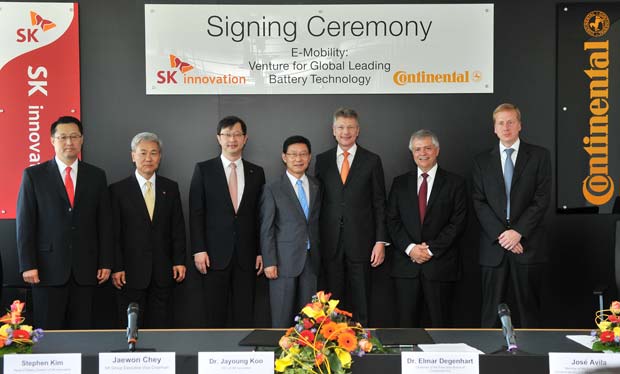 The companies signed a letter of intent during the North American International Auto Show in Detroit in January.

SK Innovation will hold a 51% stake in the joint company and Continental the remaining 49%. The new company will initially employ around 200 staff worldwide, is due to start operations in the fourth quarter and will be based in Berlin. Additional research and development work will be done in Daejon, South Korea.

Robert Lee, the joint venture’s chief executive, said the first contract from an automotive client was expected by the end of this year, or by the first quarter of 2013 at the latest.

“We expect to generate our first revenue in 2015 and reach break-even about two years later,” Lee told reporters in Frankfurt after the signing ceremony.

Continental currently forecasts pure electric cars will make up 1 to 2 percent of global new car demand by 2020, with another 8 to 9 percent being hybrids.

The cooperation deal between SK Innovation and Continental is the second link-up between a major German parts supplier and a Korean company strong in electro-chemistry and battery cells.

Bosch had formed a 50-50 joint venture in September 2008 with Samsung SDI called SB LiMotive, in which the two companies planned to have invested 500 million dollars by 2013.