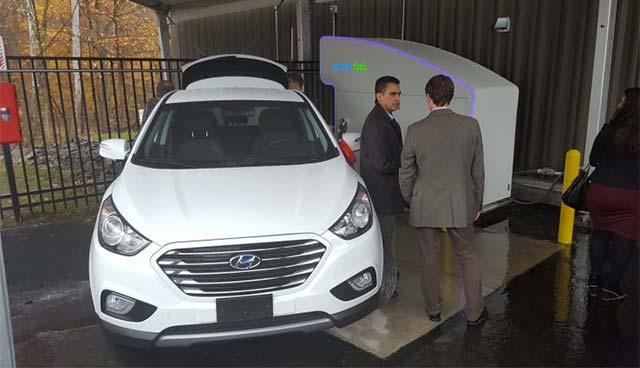 The U.S. Energy Department announced SimpleFuel as the winner of the $1 million H2 Refuel H-Prize Competition.

The SimpleFuel team, a consortium made up of Ivys Energy Solutions, McPhy Energy North America and PDC Machines, designed their system to be a safe, small-scale hydrogen-refueling appliance capable of delivering up to 5 kg/day of hydrogen to vehicles at pressures up to 700 bar (10,000 psi). 5 kg is enough to fully fuel one fuel cell electric vehicle (FCEV) for 300-360 miles.

After receiving and evaluating nine design submissions in 2015, one team –SimpleFuel– was selected by an independent panel of judges as the Finalist, to advance to Phase 2.

SimpleFuel constructed their system in 2016 in Warminster, Pennsylvania, followed by a 3-month data collection period, which ended in December 2016. During that time, an open house event was held, which was attend by DOE FCTO Director Sunita Satyapal, at which the team demonstrated their system by conducting a fueling of a Hyundai Tucson FCEV.

The National Renewable Energy Laboratory (NREL) analyzed the data collected during that testing period, and the cost information provided by the team was also independently reviewed. The H-Prize panel of judges deemed that the data collected showed that SimpleFuel’s system met both the technical and cost criteria as outlined in the final competition guidelines, thereby unanimously declaring them the winner of the H2 Refuel H-Prize.

Hydrogen infrastructure remains a critical barrier to the widespread adoption of FCEVs. The future of FCEVs in a consumer environment is dependent upon a widely available network of fueling stations. At the current early stage of market introduction, there will be a need for small-scale refueling to serve communities and residences far from the commercial hydrogen fueling station network. The H2 Refuel competition was designed to help address this barrier through easily deployed small scale fueling systems for home and community use to bridge the gap while widespread infrastructure development takes place.

More information on the H2 Refuel H-Prize is available at hydrogenprize.org.