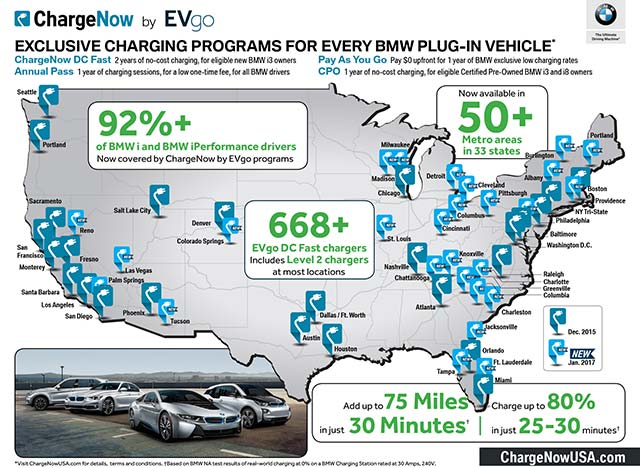 BMW of North America announced the expansion of ChargeNow by EVgo programs (including ChargeNow DC Fast) to more than 50 metro areas in the US, encompassing the entire EVgo public charging network, the largest public DC Fast charging network in the nation.

With this expansion, more than 92 percent of BMW i3, BMW i8 and BMW iPerformance (BMW X5 xDrive40e, BMW 740e xDrive, BMW 530e and the BMW 330e) drivers in the U.S. will be able to enroll to take advantage of a ChargeNow by EVgo program tailored to their vehicle, at any EVgo station.

The breadth of EVgo’s expansive fast charging network currently totals more than 668 dual-port DC Fast charging stations installed and available to EV drivers across the United States, supported by supplemental Level 2 chargers. An additional 50-plus DC Fast chargers are planned to be installed – and added to the ChargeNow by EVgo programs for BMW drivers – in 2017. EVgo charging stations are strategically located near shopping and dining establishments along convenient, well-traveled routes.

BMW i and BMW iPerformance owners can enroll for a ChargeNow by EVgo program at ChargeNowUSA. Once enrolled, drivers easily locate EVgo chargers with ConnectedDrive in their BMW vehicle, either using the in-vehicle Navigation or by using the BMW Connected App. Enrolled BMW customers use the ChargeNow card provided with their vehicle to access EVgo stations in their area, to take advantage of ChargeNow by EVgo no-cost or reduced cost public charging.

Below are details on the ChargeNow by EVgo (including ChargeNow DC Fast) programs now available to BMW i and iPerformance drivers – all of which now are available to even more BMW customers, thanks to the expansion to EVgo stations across the U.S.

ChargeNow DC Fast: Two years of no-cost charging for drivers of new BMW i3 vehicles. Eligible owners of new BMW i3 vehicles in metro areas served by EVgo stations, who purchase their vehicle on or after November 1, 2015 are eligible for 24 months of no-cost 30 minute DC Fast and 1 hour Level 2 charging sessions at EVgo stations, as part of ChargeNow DC Fast. Enroll by 12/31/18.

EVgo stations are available in the following metro areas: