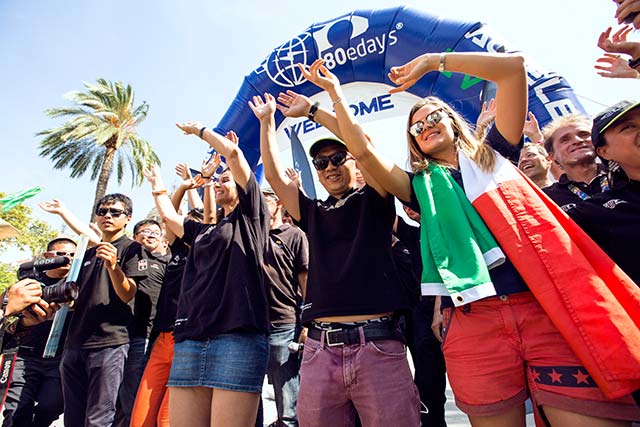 The biggest starting fleet of the 80edays around- the- world electric car rally set up a new world record. The teams successfully completed the circumnavigation trip, and drove a total of 289.662 km together across Europe, North America, and Asia with 100% electric vehicles within 80 days, including the time for cross-continental transportation.

While hailing from 9 different nations- Team Spain, Team Austria, Team China, Team Czech Republic, Team Germany I, Team Germany III, Team Hungary, Team Italia, Team Switzerland I, Team Switzerland II, and Team United States, 11 international teams shares a common goal – to show the world that EV technology is more than ready to become a driver’s first choice.  Now 80edays ambassadors- the owners of the EVs participating in the rally and the true pioneers of electric mobility, close the 80edays ELDURO 2016 chapter and herald a new dawn in the push for sustainable tech, appealing to the whole world of an essential care of our planet to make it a better place to live in for ourselves and for generations to come.

Professor Gunter Pauli, serial entrepreneur and thought leader in environmentalism, who monitored the course of the rally as one of the 80edays steward to ensure that all rules are upheld, greeted the teams at the finish line in Barcelona on September-4th. 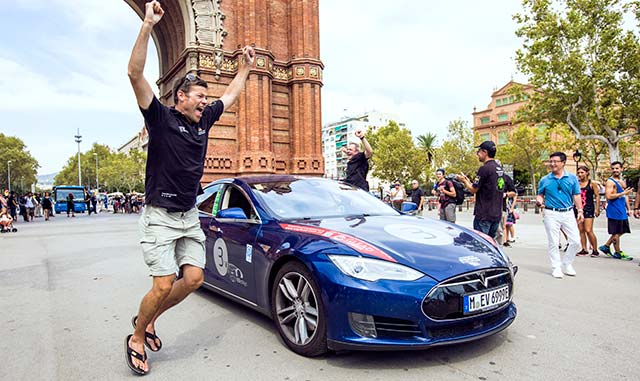 Jutta Kleinschmidt, an auto-racing legend, officiating as another steward and 80edays ambassador praises the participants’ achievement: “This has truly been one of the best experiences of my life, seeing how the will of people to change things around them has led to this great accomplishment. Rafael de Mestre, the project initiator and every participant at the rally have made the world proud and their victory is now a part of history!”

This endurance test for the crews and for the participating EVs: 8 Tesla Model S, one Tesla Roadster, one DENZA and an innovative electric bus Modulo showed that EV tech is good enough for any environment, terrain, and condition in any part of the world. Meanwhile Tesla Model S demonstrated how far the EV industry has come from its initial days.

Team Switzerland 1, faced with limitations in charging speed capabilities of the Tesla Roadster, compared to their team-mates driving Tesla Model S, had to overcome a great deal of challenges to complete the rally in due time. Due to careful planning and fierce determination, Markus Doessegger and Matthias Aebi won the dramatic race against time, catching up with the rest of the teams in Zurich after a 5-day delay for gear replacement and a subsequent 10-days delay at the US customs before its transportation to China.

Tesla Model S of Team Czech Republic had a hanger bolt breakdown in Kazakhstan, Model S of Team Switzerland 2 had a minor collision on a highway in China, and Model S of Team Germany 1 had a blackout in Ukraine. Despite these minor incidents, all teams successfully reached the finish line in record time.

To represent a nation, a co-organizer of 80edays rally Andrew Zong, the CEO of PHNIX ECO-Energy Solutions Ltd., and Team China pilot, chose DENZA EV for this trip, the first Sino-German joint venture brand focusing on new energy vehicles in China. Although experiencing more tough charging opportunities due to different charging standards in the world, Team China showed determination and proved that our planet is EV friendly to all brands of electric cars. The video production by 4 China professional camera groups is underway to share with the world the highlights of the 80edays challenge. 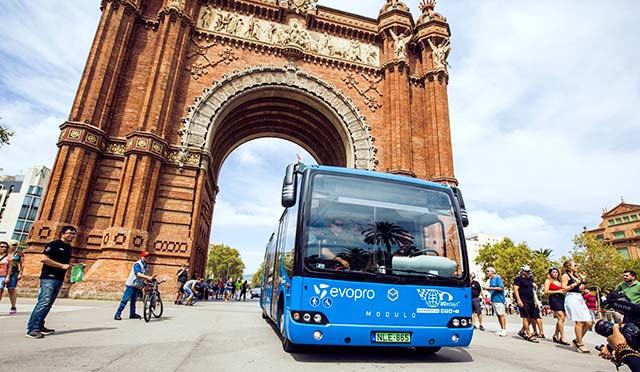 The Hungarian developed Modulo stands still as the first and only electric bus to cross North America. With improvements in construction and innovation in design, it is safe to say that the electro mobility infrastructure across the world is improving and is now suitable for public transport as well.

To help grow the EV charging infrastructure, 48 sockets were installed on the route by 80edays ambassadors, covering more than 12.000 km of charging opportunities deficiency. Two high power charge stations provided by Circutor were installed in Karaganda (Kazakhstan) and Bryansk (Russia), making up for the lack of EV charging stations from Moscow to Kiev and from Astana to Almaty. 220 charge points and 75 hotels with charging infrastructure are registered across Europe, North America, and Asia during 80-day EV rally at electromaps.com, the official 80edays charge point data base. So far, 2000 new users registered during the challenge.

The ELDURO 2016 rally was a testament to the social environment responsibility that the 80edays project has stood for. During the rally 28 symbolic 80edays trees were planted by the participants at different pre-determined locations around the world, aiming to communicate the importance of sustainable and environmentally friendly transportation.

Driving with electric vehicles the teams saved 30 tons of carbon dioxide emissions. In a bid to offset the carbon footprint of 2 cargo flights, 10,000 trees in Nicaragua Forestry have been planted as part of the Carbon Offset Project of myclimate, 80edays eco- partner.

Rafael de Mestre, Team Spain pilot and initiator of the ’80edays’ around-the-world EV rally stresses the importance of raising awareness of electric mobility. That’s exactly the reason why more than 30 events were established on the route: to promote the advantages and the reliability of sustainable transportation over fossil-fuel dependent transport around the world.