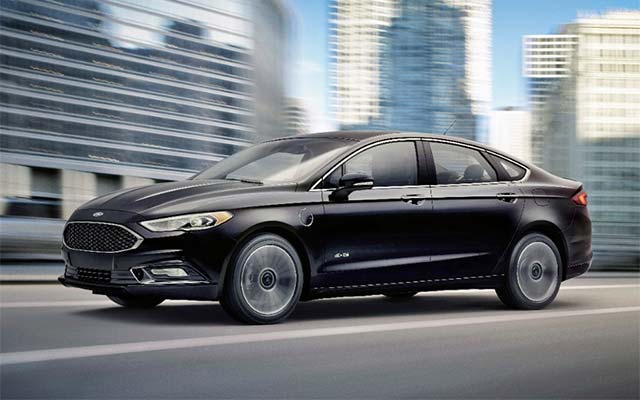 The new 2017 Fusion Energi can travel 610 miles on a full tank of gas and battery charge – according to EPA estimates posted to fueleconomy.gov – the highest combined range of any plug-in hybrid sold in America.

Changes to the car’s hybrid powertrain software and regenerative braking, which recycles energy to the battery otherwise lost when drivers hit the brakes, means the 2017 Fusion Energi can travel up to 610 miles on a full tank of gas and battery charge – up from 550 miles for the 2016 model.

Plug-in hybrids use both electric batteries and gas-powered engines. Normally, a vehicle owner will run on all-electric mode until the electricity is depleted, at which point the engine turns on automatically. The Fusion Energi’s all-electric range is an estimated 21 miles. If there is gas in the tank, the car will then operate for about a mile using both battery and gas. After that, the gas engine kicks in for another 588 miles of range – according to EPA estimates.

Kevin Layden, Ford director of electrified powertrain engineering, says Fusion Energi is a great option for people who might not live, work or play near electric-vehicle charging stations, or who take trips to places where the electric-vehicle infrastructure is not yet established.

“Fusion Energi gives them both the freedom to go gas-free for shorter trips and the fuel efficiency of a gas engine for longer trips,” he says. “And it’s very affordable.”

By 2020, Ford will invest $4.5 billion in electrified vehicles, adding 13 new ones to its product portfolio. More than 40 percent of the company’s nameplates globally will be electrified by the end of this decade.

Ford insights on plug-in hybrid drivers
Data Ford collected from more than 610 million miles logged by its electrified vehicle owners show these drivers put an average of 13,500 miles annually on their vehicles – similar to what owners of gasoline-only cars log – with about half those miles in electric mode. That breaks down to an average daily commute of 42 miles for Ford plug-in hybrid drivers.

Ford concludes from the data that most customers are likely charging their vehicles only at home – leaving a wealth of opportunity for growth in workplace charging stations.