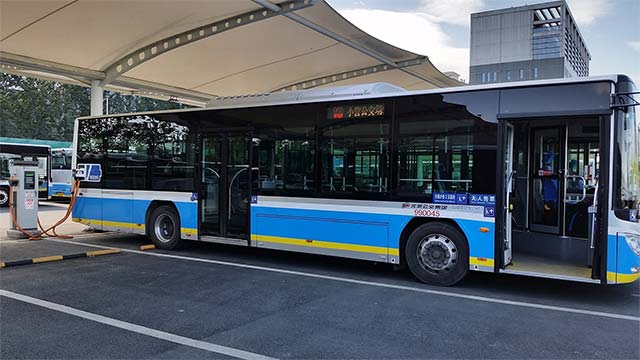 Equipped with Microvast’s ultra-fast charging battery, a Foton electric bus stops by a charging point after a few loops of operation. Trained staff plug in the charger and within 10-15 minutes the electric bus’s battery is refilled to maximum operating capacity and ready to go again.

This now happens every day in many bus terminals across metropolitan Beijing with the deployment of this cutting edge charging technology. Among all the ultra-fast charging stations, the newly opened charging station in Xiaoying Public Transit Bus Terminal is the largest.

Located in Chaoyang district, Beijing, built by China State Grid, this new charging complex covers an area of 26,500 m2 with its structures covering 1,575m2. Designed to satisfy the growing charging demand especially from the increase of ultra-fast charging electric buses departing from this terminal, this complex provides the infrastructure to charge 30 buses at the same time.

After conversion to ultra-fast charging technology, the Route 13 fleet has improved operating efficiency while reducing Beijing’s GHG emissions. Each new bus takes only 10-15 minutes to complete recharging the battery. Charging each bus takes place 2-3 times per day, during driver breaks, with several route loops between each charge.

With future facility and charging point expansions already planned out for 2016-2020, to accommodate more routes converting to fast charge EV, Xiaoying Terminal Charge station will play a greater role in the development of clean energy public transit system for Beijing in the near future.