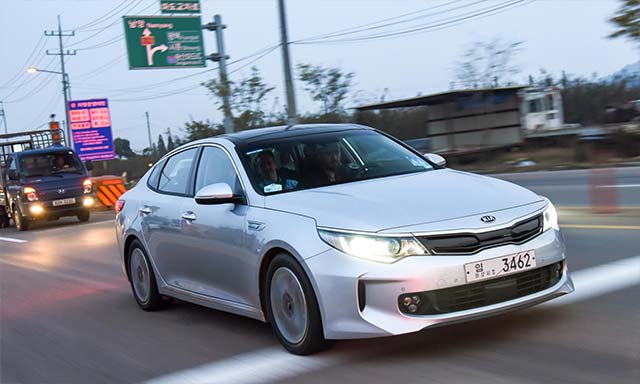 Kia Motors has revealed a few more details on the new plug-in hybrid powertrain planned for the all-new Optima.

The Optima Plug-in Hybrid will be Kia’s first plug-in hybrid for global markets when it goes on sale in the second half of 2016, offering increased battery capacity and pure electric range.

The next-generation Optima PHEV will feature a 9.8 kWh lithium-polymer battery back – roughly six times the energy output of that found in the current-generation Optima Hybrid. Paired with a 50 kW electric motor – itself 42% more powerful than in the previous Optima hybrid version – the combination allows the Optima PHEV to operate in pure-electric mode at higher speeds. Engineering teams working on the Kia Optima PHEV are expecting the car to go on sale with the ability to travel up to 27 miles on electric power alone, placing the Optima PHEV among the leaders in the D-segment for pure-electric range.

The innovative powertrain employs Kia’s efficient 2.0-litre ‘Nu’ four-cylinder GDI (gasoline direct injection) engine at its core, expected to generate 156 ps and 189 Nm. The engine is coupled with the electric motor, which allows the car to operate in charge-sustaining mode (just like the current Optima Hybrid) once the battery runs out of charge. The powertrain’s total power output is 205 ps at 6,000 rpm, with the application of the electric motor facilitating an immediate engine response to throttle inputs. 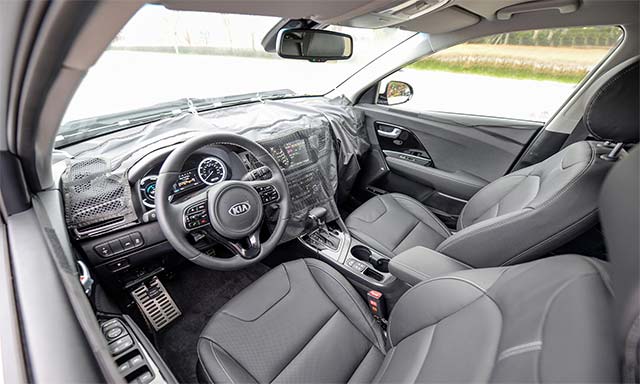 This power will be applied to the road through a smooth-shifting six-speed automatic gearbox and the transmission-mounted 50 kW electric motor, which replaces the traditional torque converter in non-hybrid Optima models. The Optima PHEV will offer a seamless blend of highly-efficient electric and internal combustion power, and a consistently high level of performance.

Based on internal tests carried out to date, the Optima PHEV is expected to deliver 119MPGe combined (99 US MPGe), while engineers are targeting 48 mpg combined (40 US mpg) in charge-sustaining mode. Once plugged in, the PHEV will recharge in less than three hours at a 240V Level 2 charging station, or nine hours from a standard 120V power outlet.

To ensure the PHEV will stand out among the Optima range, the car boasts a series of visual modifications. These include a charging port integrated into the driver-side front panel (LHD vehicles), chrome side sill moldings, new wheel designs and ‘EcoPlug-In’ badging. In the cabin, the PHEV model is equipped with a distinctive instrument cluster, which displays information about the car’s functions and powertrain status, while a charge indicator on top of the dash allows drivers to easily see the state of charge from outside the vehicle (for instance, while it charges outside a home).

The Optima PHEV will offer its own distinct styling features to differentiate from other models in the all-new Optima range. A number of exterior elements – on the rear bumper, grille surround and wheel arches – feature chrome and a clean metallic blue finish, as well as special ‘EcoPlugin’ badging.