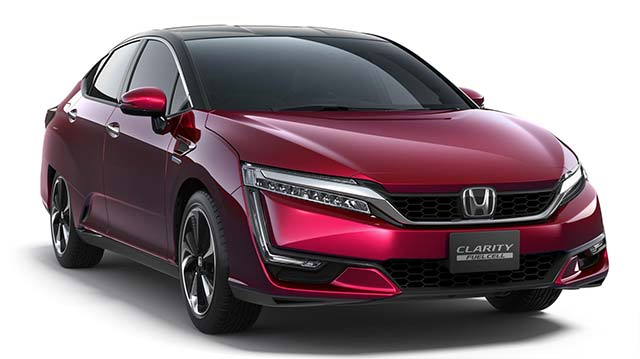 The Honda Clarity Fuel Cell sedan makes its North American debut at the 2015 LA Auto Show today as Honda announced additional details for its most advanced zero-emissions vehicle in the U.S. market.

Additionally, Honda announced that the platform underpinning the Clarity Fuel Cell will also serve as the foundation for a next-generation Honda plug-in hybrid electric vehicle (PHEV) that will launch nationwide by 2018, with more than triple the all-electric range of the Accord Plug-In Hybrid Sedan.

Honda will begin deliveries of the Clarity Fuel Cell to customers in late 2016 through select fuel cell dealers in select California markets starting in Los Angeles and Orange Counties, the San Francisco Bay Area and Sacramento. Eventually, Honda will expand the scope of its marketing to additional California markets and other states, including the Northeast as hydrogen refueling networks expand. 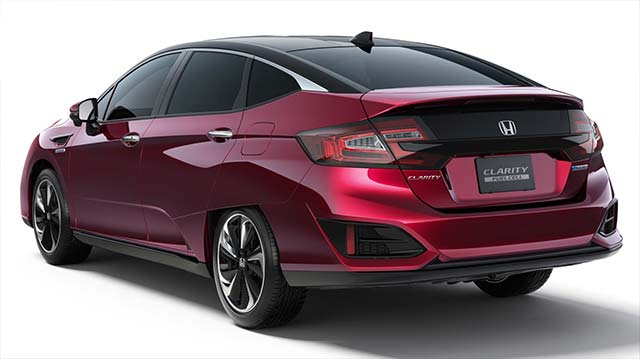 Honda Clarity Fuel Cell
Technological innovations to the Clarity Fuel Cell have created a fuel cell stack that is 33 percent more compact than its predecessor with a 60 percent increase in power density compared to the outgoing Honda FCX Clarity. The more compact fuel cell powertrain, comparable in size to a V-6 engine, fits entirely under the hood of the car, allowing for a spacious cabin with seating for five passengers. The new Honda Clarity Fuel Cell will feature a driving range estimated to exceed 300 miles, and an anticipated refueling time of approximately three minutes at a pressure of 70 MPa. 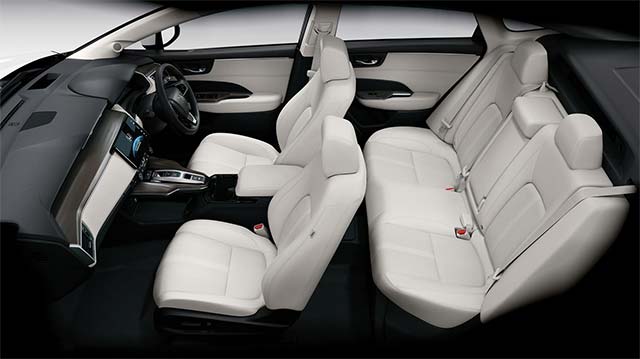 Honda sees hydrogen and hydrogen fuel cell vehicles as one of the most promising pathways to address climate change by reducing CO2 emissions of transportation. Honda has announced a company-wide goal of reducing CO2 emissions by 50 percent by 2050, and the Clarity Fuel Cell is a one of a series of bold steps towards achieving that goal.

Next-Generation Plug-In Hybrid
In addition, the platform underpinning the Clarity Fuel Cell also serves as the foundation for a next-generation PHEV Honda will launch in the U.S. by 2018. This will be a new volume production vehicle in the Honda line up available nationwide. Featuring a second iteration of the two-motor hybrid plug-in system offering significant improvements in battery capacity and power, the next-generation Honda PHEV will offer more than triple the 13-mile all-electric range of the Accord Plug-In Hybrid Sedan. This range will enable a zero emissions commute for the average American, while increases in power will enable EV operation at highway speeds.

Honda Fuel-Cell Vehicle Leadership
Honda has led the industry for nearly two decades in the development and deployment of fuel-cell technology through extensive real-world testing and customer deployments, including the first government fleet customers and first-ever retail customer leasing program. Since the introduction of its first-generation fuel cell vehicle, the FCX, in 2002, Honda has made significant technological advancements in fuel-cell vehicle operation in both hot and freezing weather while meeting customer expectations and safety regulations.

Honda has deployed vehicles in the U.S. and Japan, including the FCX Clarity, which was named the 2009 World Green Car. The company has delivered these vehicles to individual retail consumers in the U.S. and collected valuable feedback concerning real-world use of both fuel-cell vehicles and public hydrogen refueling stations.

Honda’s second-generation fuel-cell vehicle, the FCX Clarity, launched in July 2008 and was quickly heralded as a technological breakthrough in the areas of design, packaging and efficiency. As the world’s first dedicated platform fuel-cell vehicle, the FCX Clarity was powered by the Honda V-flow fuel cell stack positioned in the center tunnel of the vehicle, with the electric motor located down low in the front of the vehicle, providing performance on par with a gasoline powered sedan, including 240 miles of driving range.

In an effort to speed the advancement of a refueling infrastructure outside of California, in May 2013 American Honda joined the public-private partnership H2USA, which brings together automakers, government agencies, hydrogen suppliers, and the hydrogen and fuel-cell industries to coordinate research and identify cost-effective solutions to deploy infrastructure that can deliver affordable, clean hydrogen fuel in the United States. Additionally, in an effort to support the wider introduction of fuel-cell vehicles, Honda in 2014 pledged $13.8 million in financial support to FirstElement Fuel to build additional hydrogen refueling stations throughout the state of California.

In June 2013, Honda entered into a long-term collaborative agreement with General Motors to co-develop the next-generation of fuel-cell systems and hydrogen storage technologies, aiming for the 2020 timeframe. The collaboration expects to succeed by sharing technological expertise, economies of scale and other benefits.