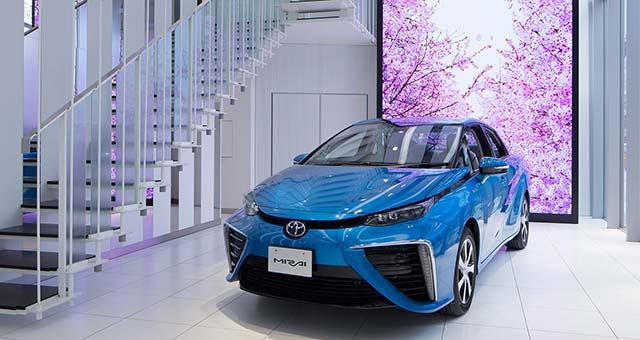 On Friday, Toyota will open a showroom to highlight the Mirai fuel cell vehicle, which went on sale last December.

Located within a hydrogen station operated by Iwatani Corporation in Tokyo’s Minato Ward, the space will serve as a hub for sharing information on fuel cell vehicles and hydrogen, with the aim of promoting a hydrogen-based society.

In addition to having one Mirai on display and another for test drives, the showroom will use videos and other media to raise awareness about the features of the vehicle, the benefits of hydrogen and more.

The 2016 Toyota Mirai is a four-door, mid-size sedan with performance that fully competes with traditional internal combustion engines – but it uses no gasoline and emits nothing but water vapor. The groundbreaking fuel cell electric vehicle is powered by hydrogen, re-fuels in about five minutes, and travels up to 300 miles on a full tank.

The Toyota Mirai will be matched by a comprehensive, 360-degree Ownership Experience offering a range of services, including:

– Three years of Toyota Care maintenance, which covers all recommended factory maintenance, up to 12,000 miles annually;

– Complimentary hydrogen fuel for up to three years.

What’s more, thanks to fuel cell technology’s versatility and adaptability, the Mirai offers performance options that go well beyond a traditional automobile. In fact, the vehicle will be offered with an optional power take off (PTO) device that enables Mirai to serve as a mobile generator in case of emergency. With the PTO accessory, Mirai is capable of powering home essentials in an average house for up to a week in an emergency – while emitting only water in the process.