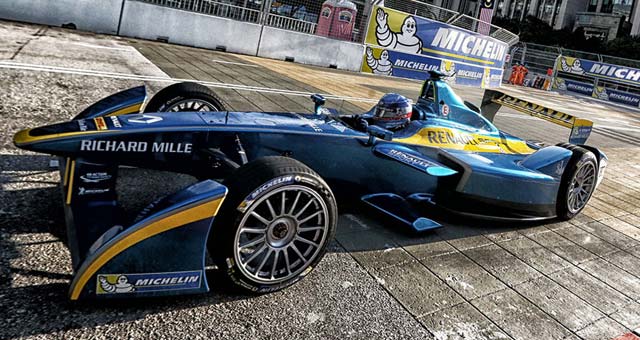 Four races. Four winning drivers. Four winning teams. So far, the FIA Formula E Championship has proven to be a wide-open contest. No driver is yet to convert pole position into a race win, while starting on the back row of the grid has been no barrier to finishing on the podium.

Despite these impressive statistics, there is one team that has demonstrated a small, but marked, advantage. With three poles (although one was denied as a result of a previous penalty), one win and three podiums, the e.dams-Renault team is leading the way in the teams’ standings.

“Alain and his son (Nicolas) were looking at Formula E, I was looking at Formula E – it was a big bet – and I wanted to share it with someone and I think that Alain was the best partner ever, in terms that he is doing a lot of the communication and PR and he has incredible contacts,” explains Driot. “And on my side I think I have proven that I can run and manage a team. And together I think it was the best combination.”

Buemi surprisingly struggled in the first-ever Formula E race – the Beijing ePrix – but Prost Jnr reinforced the strength of the package, taking a comfortable pole position and leading all the way until his infamous last-corner crash with Venturi’s Nick Heidfeld.

This left the team on just three points and slightly on the backfoot in the title chase.

Prost once again headed the qualifying times as the series reconvened for round two in the Malaysian city of Putrajaya. However, his penalty for the Beijing incident meant he would in fact start 11th.

Buemi had another qualifying to forget, and an error from the team in adding the ballast meant once again he started from the back. This time he had the sort of race pre-season form had indicated, charging his way up the order to come home third.

Victory next time out in Punta del Este for Buemi was followed by utter dominance of the practice and qualifying session in Buenos Aires. But a tiny misjudgment in the race resulted in him clipping the wall with his right front wheel and instant retirement.

Prost, having been out-qualified by his team-mate for the first time, had his best result to date, taking second place.

Bearing all this in mind, it’s no wonder that Alain Prost thinks the team ought to be in an even stronger position.

“We are satisfied obviously with the performance of the team and the drivers,” he states. “But we thought that it could have been better.”

The secret of success
To any followers of top level junior single-seater racing, the performance of e.dams will come as no surprise. For more than 25 years, DAMS has been one of the leading outfits in the championships directly beneath Formula 1, whether that’s F3000, GP2, Formula Renault 3.5 or A1GP.

But during the past four seasons, the team has enjoyed an especially remarkable run of success. Since winning the GP2 championship with Romain Grosjean in 2011, DAMS has taken a further two drivers titles with Davide Valsecchi and Jolyon Palmer and two teams’ titles. It entered the Formula Renault 3.5 series in 2012. A year later it won the teams’ and drivers’ titles, a feat it repeated last year too.

“DAMS is now a 27-year-old company. We are not motor racing only since yesterday,” says Driot. “Also the people at DAMS stay very long, so we know each other very well with all our assets and weaknesses. “Also with the mechanics and the people who are there for quite a while – we don’t change every weekend, or every six months or every year – and this is why, for example last year in GP2 we have never had a single mechanical problem during the full season. In order to win championships you need performance and reliability.”

The level of preparation has impressed the drivers too. “We have done a good job so far but if you look at the success of the DAMS team in other series they have won everything they’ve done,” says Buemi. “I think they are doing a great job when engineering the car and in terms of looking after the car to utilise performance and reliability. We have had a good car for qualifying, probably the best, but we are now also focusing on improving specifically for the race. The mechanics are doing a fantastic job to get the most out of the car.”

The biggest challenges
With so many different winners and with the races so action-packed, simply having a fast car is no guarantee of success in Formula E. The unique one-day format is also incredibly challenging for both drivers and teams alike.

“It is very difficult, it is something very new for us and a lot of stress for everybody,” says Alain Prost. “We get the car on Thursday and then we have to prepare the car. Everything is done on one day so if you do a small mistake from the driver, the mechanics or anybody then your race is almost compromised. It’s very different but at the end of the day I think for spectators and for the public and us it’s very exciting and I think that’s most important.”

Driot agrees: “It’s big big pressure. We are used to the other way of racing, without the pressure. When I win in GP2 or 3.5 I am happy, but it’s nothing exceptional, but here I have the same emotion that I did when I had a car we were racing across the finish line at the 24 Hours of Le Mans.”

The drivers
Both Buemi and Prost have racing careers outside Formula E. Last November Buemi was crowned the World Endurance Car champion, and this year he’ll be defending his title for the works Toyota team. He’s also a test driver for the Red Bull Formula 1 squad, although testing restrictions mean his actual cockpit time is limited.

Prost also races in the WEC, driving for Rebellion, where Heidfeld is his team-mate.

“My switch to sportscars wasn’t a complete switch,” he says. “It was back in 2009 and I was doing A1 at the beginning of the year for France as well as LMP1, and the plan was to keep doing both single-seaters and sportscars. Unfortunately A1 didn’t continue so I moved to ice racing during the winter and then in 2010 I did my first F1 test with what was then the Renault F1 Team. From then on I was always still involved with Renault [now Lotus GP] and have been for the past six years. At the time there wasn’t really the opportunities for me to race in single-seaters but then when Formula E came along I was really excited because I thought it would be a really good opportunity for me.”

The future
For season two and beyond, the Formula E regulations open up as the series allows manufacturers to come in and showcase their capabilities. Having such a close association with Renault could be crucial as the championship enters its next phase.

“We hope to be a lot more involved with Renault because now we are starting the development of the cars, so it’s very important to be with a manufacturer,” says Driot. “Up until now they have not been interfering with us in the racing. Now we are starting to work on the second year and we hope to be one voice together.”

Alain Prost won nine races as a Renault driver in Formula 1, plus a further seven and the 1993 title with a Renault engine at Williams. He now works as an ambassador for the company, so he’s naturally very keen to see the relationship extended.

But there are still six more rounds left this season and both drivers know they are going to have to fight all the way if they want to have the honour of being the first Formula E champion.

“You always knew it was going to be very tough competition because there’s a lot of good drivers and a lot of good teams,” reckons Prost. “There’s nobody you look at and you’re like ‘oh, they’re going to be easy to beat’. On the other hand, I’ve known I’ve always had good pace in single-seaters and knew I was quite good on street tracks from when I’ve raced on them in the past. You knew it was going to be a tough fight but I feel I can hold my own and so far it’s been good but it’s going to get harder and be a tough fight for the title.”

Buemi adds: “I think I cannot really be happy with my season so far as we could have achieved a lot more. We have a good car and I have lost too many points. You can always look back and blame the driver or the team but I have made some driving errors and that is something quite easy to do in these cars. I could have done better but we are still in the chasing group to win the championship. Lucas [di Grassi] is slightly in front but we have a competitive package and if we don’t make mistakes we can have a great chance to fight for the title. Right now we need to make sure we do the basics right and we can have a realistic chance.”