The Numbers Really Do Add Up With A Mitsubishi Outlander PHEV 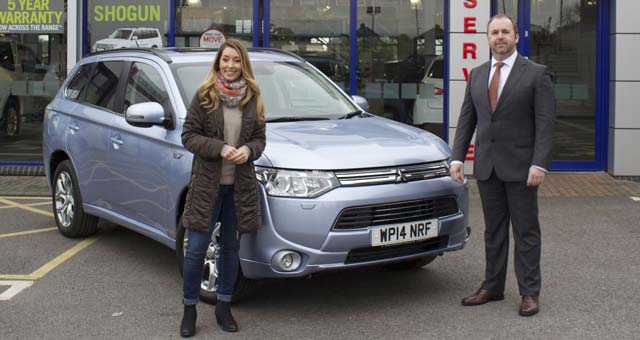 An accountant from Bridgend is set to star in a new video campaign for the Mitsubishi Outlander PHEV.

Stephen Griffiths, Director of DWA Accountants, which has offices in Cardiff and Swansea, as well as Bridgend, is featured in one of five new films that will be shown on social media by Mitsubishi Motors in the UK.

Outlander PHEV driver Stephen agreed to take part in the campaign that focuses on real-life stories purely because he has advised so many clients that the Mitsubishi Outlander PHEV makes perfect financial sense.

He said: “It’s a great vehicle for your business owner, whether you’re a sole trader or a limited company. For company car drivers the tax savings are significant. Due to the Outlander PHEV having a 5 per cent Benefit in Kind rate it means a higher rate tax payer can drive one of these for just over £50 a month, which means saving up to 80% on your company car tax bill.

“The reaction from clients has been excellent. We ran a presentation where we talked about the tax advantages and cash savings which led to a lot of interest from clients. When we ran the numbers a couple of clients questioned whether they were correct because they were so impressive. On one particular calculation that we did, the savings were coming out at over £5,000.”

The Outlander PHEV also qualifies for 100 per cent First Year Allowance against business profits, as Stephen explained: “When a business buys a vehicle they get a tax allowance based on the value of that vehicle. For most company cars the allowance isn’t particularly attractive but with the Outlander PHEV you are able to write off the entire cost of the vehicle in one year. So on a £30,000 vehicle you are reducing your taxable profits by £30,000, which for a company means a saving of £6,000.

A film crew of seven, including presenter Ruth Frances, spent the day with Stephen, filming him at Nathaniel Cars Mitsubishi in David Street and on a drive to a business meeting.

He added: “From a personal perspective I think it’s a great family car. As someone who has a growing family, it does seem to tick all the boxes. From a business perspective, the tax advantages and cash savings are very impressive and really mean the Outlander PHEV stands out in the company car market.”