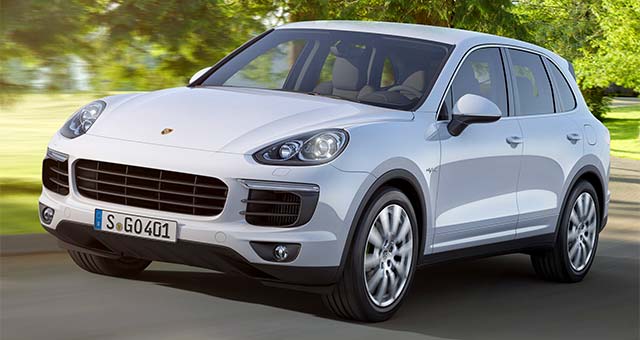 In addition to the Cayenne S E-Hybrid, Porsche is presenting the other models that comprise the new generation of Cayenne including the Cayenne S, Cayenne Turbo, and Cayenne Diesel.

Leading the effort to improve fuel economy and reduce emissions, the new Cayenne S E-Hybrid sets a benchmark in efficiency, allowing driving on pure electric power, while accelerating from 0 to 60 miles per hour in just 5.4 seconds, thanks to a combined system output of 416 hp.

This powertrain has already been widely accepted by consumers: Of the 16,698 Panameras that have been delivered to customers worldwide during the first eight months of 2014, 1,513 were Panamera S E-Hybrids – which amounts to a model share of 9 percent. In the United States, the E-Hybrid makes up 16 percent of all Panameras sold through August 2014. Porsche expects a significant market share for the Cayenne S E-Hybrid as well.

The Cayenne S E-Hybrid is the first plug-in hybrid in the premium SUV segment. The technical progress made here is immense compared to the previous Cayenne S Hybrid. The new model has a lithium-ion traction battery with an energy capacity of 10.8 kWh, which enables pure electric driving. The power of the electric motor was more than doubled, from 47 hp to 95 hp, resulting in an all-electric top speed of 78 mph. Combined with the 3.0 liter supercharged V6 (333 hp), a total system power of 416 hp at 5,500 rpm and a total system torque of 435 lb.-ft. from 1,250 to 4,000 rpm is available. This enables driving performance on the level of a sports car: zero to 62 mph in 5.4 seconds and a top speed of 151 mph. The traction battery can be charged from the electric power grid or while driving. Porsche Car Connect is standard on this vehicle, and allows the driver to pull relevant vehicle data from a smart phone.

In this latest version, Porsche designers have given the Cayenne an even sharper design with precise lines and purposefully placed light refracting edges. The design of the front body, the front fenders and the hood are entirely new. Another new feature are the airblades, which are air fins located on the right and left of the vehicle’s front end used to guide air to the intercoolers for cooling, while also making a strong visual statement.

At first glance, the new Cayenne can be clearly made out as a Porsche by its Bi-Xenon headlights, which are standard on the Diesel, S, and S E-Hybrid models, with “hovering” four-point LED daytime running lights. Standard on the top model, the Cayenne Turbo, are high performance LED headlights with the Porsche Dynamic Light System (PDLS).

The rear section of the new Cayenne was also thoroughly updated. The layout of the rear lights creates a three-dimensional effect; the brake lights – like the LED daytime running lights in front – are designed in four elements. The license plate recess, tailgate handle and lights are now integrated more elegantly into the tailgate lid. The vehicle’s horizontal lines were also re-designed, giving the vehicle an even fuller stance on the road. The newly designed exhaust tailpipes are now integrated in the lower rear fascia.

In the interior, designers devoted much of their effort to the driver’s space. The driver now gets a new multifunction sport steering wheel with shift paddles as standard. Its look and functions are based on the steering wheel of the 918 Spyder. The rear seating system has also been updated to be even more comfortable, and seat ventilation can now be ordered as an option for the rear seats.

The Porsche Cayenne S E-Hybrid will be presented to the general public for the first time on October 2 at 9:35 a.m. (CET) in Hall 4 during the official Porsche press conference at the Paris Motor Show.