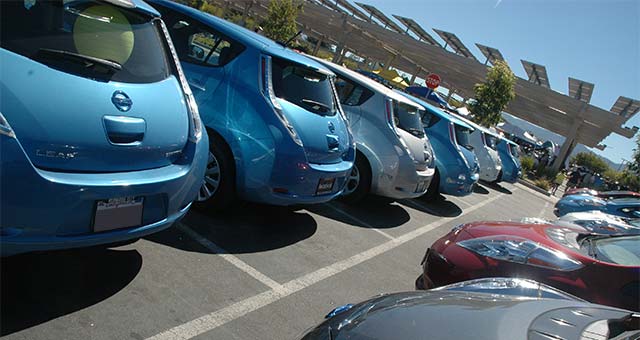 California sped past a major milestone this week – selling more than 100,000 plug-in vehicles since the market started in 2010.

The six-figure sales mark was announced by the California Plug-In Electric Vehicle Collaborative, based on data collected by the California Air Resources Board.
Plug-in sales have risen steadily over the last several years – and this new milestone drives California closer to achieving Gov. Brown’s goal of 1.5 million electric cars on the road by 2025.

“California’s plug-in electric vehicle market is ramping up, and we expect to see significant growth over the next 10 years as customers realize how economical and convenient they are,” said collaborative Executive Director Christine Kehoe.

“California was the site of the world’s first Nissan LEAF delivery and has been the leading state for our 60,000 U.S. LEAF sales,” said Brendan Jones, director, Electric Vehicle Sales and Infrastructure Strategy for Nissan. “We thank the State of California for actively supporting the adoption of electric cars and for helping us make LEAF the best-selling EV on the market today.”

In addition to automakers rolling out dozens of plug-in electric vehicle models for consumers over the next couple of years, utilities are working to provide a clean, reliable and affordable fuel source for plug-in car owners. And, drivers have increasing options to refuel at home overnight or charge at workplaces across the state.

“Electric vehicles are an integral part of California’s cleaner future. With more than 10,000 electric vehicles on the road in the SDG&E service territory today, it is evident that our customers are embracing the benefits of clean electric transportation,” said James P. Avery, San Diego Gas & Electric (SDG&E) senior vice president of power supply. “SDG&E is committed to providing our customers with the clean energy, attractive electric rates and resources needed to support

Driving on electricity in California is the equivalent of driving for $1 per gallon of gasoline.