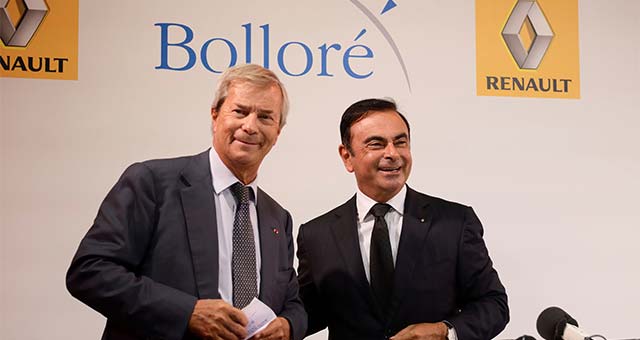 Renault will assemble Bollore Bluecar EVs at its factory in Dieppe, France, starting in the second half of 2015, the French automaker said in a statement.

The companies will also set up a joint venture, 70 percent owned by Bollore and 30 percent by Renault, to provide car-sharing services in France and elsewhere in Europe.

The companies will also carry out a feasibility study for Renault to develop and build  a new three-seater electric vehicle equipped with Bollore’s batteries to be sold to consumers, companies and municipalities.

INDUSTRIAL COOPERATION AGREEMENT
The Dieppe plant specializes in building vehicles in small series. It currently builds Clio Renaultsport and is set to build the future Alpine, scheduled for launch in 2016. The Dieppe plant will be able to rely on the expertise of the Renault group in cars to acquire the skills necessary to assemble this type of vehicle.

A new final assembly workshop will be set up specially within the plant to build these vehicles. The Bollore group will thus have access to modern production tooling tailored to its requirements and delivering a significant reduction in costs.

FOUNDING OF A JOINT-VENTURE IN CAR-SHARING
With a number of cities now taking coercive measures to address air quality and congestion by limiting traffic, the Renault and Bollore groups have decided to set up a joint-venture, whose aim will be to win and install complete electric car-sharing solutions in France and Europe. The Renault group will hold a 30 percent interest in the joint-venture, while the Bollore group will own 70 percent.

As part of this agreement, from the second-half of 2014, customers using car-sharing networks in Lyon (Bluely) and Bordeaux (Bluecub) will be able to choose a Twizy, a vehicle that is different but complementary with the Bluecar, already available on a car-sharing basis in both Lyon and Bordeaux.

Renault vehicles will be gradually integrated with the car-sharing fleet to reach a proportion of 30 percent as quickly as possible.

FEASIBILITY STUDY FOR A 3-SEATER BLUECAR
The Bollore group has asked Renault to conduct a feasibility survey on the design, development and production in a Renault Group plant in France of a smaller car than the existing Bluecar (three seats instead of four), able to support the expansion of car-sharing initiatives. This vehicle could also be sold to consumers, companies and municipalities.

This electric vehicle will be equipped with a Blue Solutions lithium-metal-polymer (LMP) battery with a capacity of 20 kWh.

REDUCING ENVIRONMENTAL IMPACT
In order to significantly reduce the environmental impact of cars, the development of electric vehicles and car-sharing is not an option; it is a necessary transformation.

The overall environmental impact of an electric vehicle is virtually half that of an equivalent internal combustion engine (ICE) vehicle. Electric vehicles emit no CO2, smells or fine particles (excluding wear parts) in use. As a result, they significantly improve air quality and noise levels, particularly in the city. Without electric vehicles, improvements in urban air quality will be slow, driven only by the renewal of the ICE vehicle parc and by changes to regulations on pollutant emissions.

For this reason, the Renault and Bollore groups have decided to build on their complementarity. The Renault group has expertise in the design, development and production of electric vehicles (ZOE, Kangoo, Twizy). The Bollore group is a key player in electricity storage solutions, a field whose applications include car-sharing programs based on all-electric vehicles. This application is recognized today with the success of Autolib in Paris.