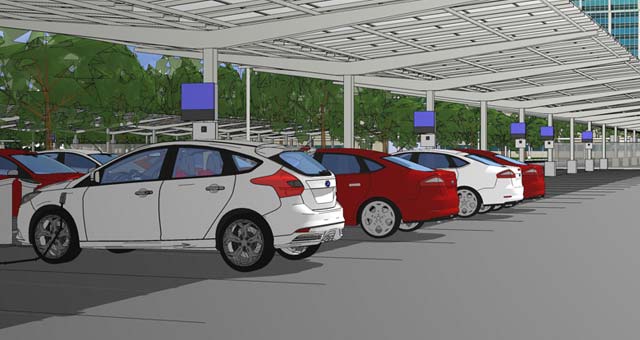 The project, funded by DTE Energy, will provide employees with 360 covered parking spaces and 30 charging stations for plug-in electric vehicles such as the company’s Ford Fusion Energi and C-MAX Hybrid Energi. A kiosk will also be on site offering general information to visitors about solar power and specific details about the Ford carport.

“Ford has a long history of innovation and a deep commitment to sustainability,” said Bill Ford, executive chairman of Ford Motor Company. “Our fundamental purpose as a company is to make people’s lives better. We do that by creating outstanding products, by investing in communities where our employees live and work, and by using technology to tackle global sustainability challenges. Those beliefs are embodied in this project.”

The solar canopy will have capacity to generate 1.038 megawatts of electricity – enough to power 158 average-sized homes. It will be the second-largest solar carport in the Midwest, after a 1.1-megawatt facility at the Cincinnati Zoo in Ohio, and it will reduce the amount of electricity Ford pulls from the grid to run its offices.

Under a recently finalized agreement, DTE Energy will construct, operate and maintain the carport for 20 years. Construction is slated to begin in September and be completed in early 2015.

The solar installation is part of an initiative DTE Energy launched in 2009 called SolarCurrents. The program works to fulfill DTE Energy’s commitment to generate 10 percent of its energy from renewable sources by 2015.

“The SolarCurrents canopy project is another example of how DTE Energy and Ford are working to build a more energy-efficient and sustainable future,” said Irene Dimitry, DTE Energy vice president, marketing and renewables. “At the same time, this project will help us come closer to meeting Michigan’s renewable energy goals and diversify our energy portfolio.”

This is the second collaboration between Ford and DTE Energy in recent years.

In 2010, the companies teamed up to install a 500-kilowatt solar photovoltaic panel system at Ford’s Michigan Assembly Plant in Wayne, Michigan. Energy generated by the system helps power vehicle production at the plant, where Ford Focus, Focus Electric, C-MAX Hybrid and C-MAX Energi are built.

Ford World Headquarters is home to other environmental innovations. In 2012, a “living roof” was installed when a 2,500-square-foot portion of the rooftop needed repair.

Multiple varieties of sedum were planted to reduce storm water runoff from the building. The project built on the success Ford saw a decade ago when it developed its first green roof at Dearborn Truck Plant, home of F-150 pickup production.

– 10.4 acres of drought-resistant vegetation (the equivalent of eight football fields) was planted on top of the truck plant

– The roof, covered with 11 plant species that act as insulation, lowers the amount of heat entering the building by 70 percent, reducing cooling costs by 5 percent