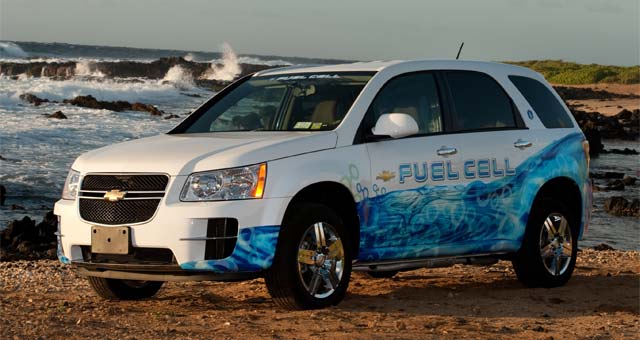 Most major automakers, including GM, have made significant progress in the development of fuel cell electric vehicles, but achieving commercial deployment with global impact will require further cost reductions.

“The goal of this partnership is to help advance fuel cell materials and manufacturing technologies that have the ability to result in improved performance and durability while also meeting cost targets,” NREL Group Manager for Electrochemical Engineering & Materials Chemistry Bryan Pivovar said. “Collaborating with GM allows NREL the ability to leverage a knowledge and material base beyond what is publicly available, and ensure the most relevant research areas are being addressed as efficiently as possible.”

“The Department of Energy has developed significant capability in fuel cell R&D, both in people and equipment, within the national lab system,” Executive Director of GM’s Fuel Cell Activities Charlie Freese said. “This arrangement provides the framework to efficiently apply the fundamental perspective and tools at NREL to address the real-world development challenges we are currently working to resolve.”

NREL and GM will focus on critical next-generation fuel cell electric vehicle challenges, which include reducing platinum loading, achieving high power densities, understanding the implication of contaminants on fuel cell performance and durability, and accelerating manufacturing processes to achieve the benefits of increased economies of scale.

The work will be done under a Cooperative Research and Development Agreement (CRADA) between NREL and GM and takes advantage of NREL’s state-of-the-art Energy Systems Integration Facility (ESIF). The effort includes staff collaboration and the exchange of equipment, knowledge, and materials.

“Within ESIF, more than 6,500 square feet of lab space has been custom built with the goal of supporting integrated efforts in fuel cell material and manufacturing research and development,” NREL Associate Laboratory Director for Energy Systems Integration Bryan Hannegan said. Special features of the facility include hazardous material and gas handling capabilities and the infrastructure required to support a wide range of appropriate test conditions including integrated electrical, thermal, and hydrogen systems.

In July 2013, GM and Honda announced a long-term collaboration to co-develop next-generation fuel cell and hydrogen storage systems, aiming for potential commercialization in 2020. In addition, GM and Honda are working together with stakeholders to further advance refueling infrastructure, which is critical for the long-term viability and consumer acceptance of fuel cell vehicles.

NREL’s work on the project is funded by the Energy Department’s Fuel Cell Technologies Office in the Office of Energy Efficiency and Renewable Energy.

NREL’s collaboration with GM dates back to 1993, when the Partnership for a New Generation of Vehicles was launched to accelerate development of hybrid-electric cars. Since then, the automaker has been one of the lab’s key partners in advancing sustainable transportation R&D, with projects ranging from advanced power electronics and battery thermal management and modeling studies to a multiyear National Fuel Cell Electric Vehicle Learning Demonstration. Data from the Learning Demonstration were sent to the National Fuel Cell Technology Evaluation Center (NFCTEC), a data center housed within ESIF for independent analyses of advanced hydrogen and fuel cell technologies. This latest effort builds on a team project studying the effects of system contaminants on fuel cells that NREL and GM have been part of since 2009.