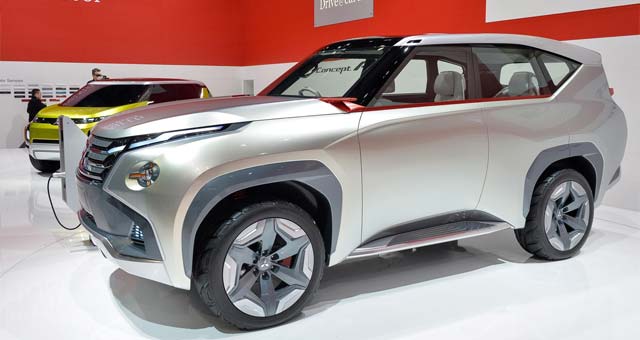 To be displayed for the first time in Europe during the 2014 Geneva Motor Show, Concept GC-PHEV blends nearly seven decades of Mitsubishi 4WD technology with the engineering fundamentals of the all-new low environmental impact Outlander PHEV – a new page in the full-size SUV textbook.

True to a long line of 4WD Mitsubishi vehicles that started in 1936 with PX33, Concept GC-PHEV expresses MMC’s contemporary vision for a large, robust and powerful car able to pamper its passengers in utmost safety over all sorts of terrains (where legal), for work or leisure, with the lowest possible environmental impact.

Concept GC-PHEV’s design is meant to express both a reassuring sense of safety and a welcoming and comfortable openness to the interior.

Exterior styling blends muscular volumes with sharp lines resulting in a sculpted 3D-shape which appears to have been carved out of a single block. With the day-time running lamps positioned high for maximum vehicle visibility, the headlamps located within the bumper, the high slatted grille and the large front skid plate, the front fascia is powerful, purposeful and stately.

At the rear, integrated seamlessly into the wide bumper, the large tailgate marries an appealingly fresh appearance with good functionality while rearward visibility is enhanced with the use of sub-windows.

The body design also utilises a combination of aerodynamic-enhancing features throughout, incl. variable front grille slats for better engine cooling, while the absence of B-pillars adds to the sense of openness, convenience and freedom provided by Concept GC-PHEV.

The Concept GC-PHEV features the brand’s new visual identity which will be gradually introduced with each new Mitsubishi Motors crossover and SUV over the coming years. Meant to symbolise the functionality and reassuring safety inherent to SUVs, this visual identity is made of vertical elements (either chromed or lighted) bracing the front end of the vehicle(s) either side of the grille.

In this case, the PHEV powertrain is made of a 3.0-litre V6 super-charged MIVEC petrol engine, a clutch, an 8-speed automatic transmission, a high-output electric motor and a high-capacity battery, the latter installed under the rear cargo floor for better front/rear weight distribution.

As for Outlander PHEV, this new PHEV system automatically switches automatically between pure EV Mode and Hybrid Mode(s) depending on driving conditions, remaining battery charge and other factors.

In the case of Concept GC-PHEV, Mitsubishi Motors engineers took the PHEV concept even further through:

– Integration of an 8-speed automatic gearbox: integral to the PHEV system. In EV Mode, it is intended to maximise motor output efficiency at all vehicle speeds (within legal limits).  In Hybrid Mode(s), it extracts power from the engine while the high-output motor kicks in to provide additional power as and when required.

– Move from two electric motors (front and rear) as fitted to Outlander PHEV to one single motor, saving on weight and friction losses.

Delivering punchy performance with comfortable reserves of power, the PHEV system makes for a solid and satisfying driving experience and helps Concept GC-PHEV take poor road surfaces or pulling a caravan or trailer easily in its stride. It also delivers the excellent response and smooth acceleration and luxury-car levels of quietness inherent to the PHEV system.

Concept GC-PHEV PHEV’s high-capacity battery can be used as an external power source. The 100V AC on-board socket can output up to 1500 watts of electrical energy, ideal for powering equipment when camping or enjoying other outdoor pursuits as well as providing an emergency power source for domestic appliances. The system can supply the equivalent of a day’s power consumption in an average household from the battery alone and up to a maximum of up to 13 days when the engine is used to fill the battery.

In this new application, S-AWC is based on a full-time 4WD system including a rear differential + an Electronically-controlled Limited Slip Differential (LSD) at the front + another Electronically-controlled Limited Slip Differential in the centre + an Electric-Active Yaw Control (E-AYC) unit at the rear. The latter uses torque from the electric motor to precisely control torque distribution to each rear wheel, providing excellent vehicle stability.

Furthermore, low range – to be used off road (where legal) – is obtained through a centrally-mounted Sub-Transmission unit, acting as transfer case.  According to road surface conditions and the selected traction mode, S-AWC works in cooperation with the PHEV system to assist the driver in following their chosen line through corners as well as realising remarkable all-terrain (where legal) performance.

This technology is set to bring significant changes to the time we spend in our cars. Linked to a vehicle information network, the connected car system uploads vehicle status information on a real-time basis and links it with traffic in the vicinity, traffic signal and other information to advise the driver on how to drive their car more economically.

The system also provides a Failure and Malfunction Early-detection System, which urges the driver to seek repairs or service, as well as an Accident Damage Prediction Reporting function including link to the emergency and safety services.

Located in the centre of the cabin, the touch-screen Tactical Table is a new kind of tool that uses connected car technology to push the boundaries of occupant fun and pleasure in unknown ways.

No one-way street – where information is only received – the Tactical Table generates a new style of motoring life where occupants can use their smart phones to “gather” information on their trip, “Create” an original map or trip plan as well as “Share” that information with others using on board communicators.[wzslider height=”400″ lightbox=”true”]