ITV Tunes Into The Benefits Of The Mitsubishi Outlander PHEV 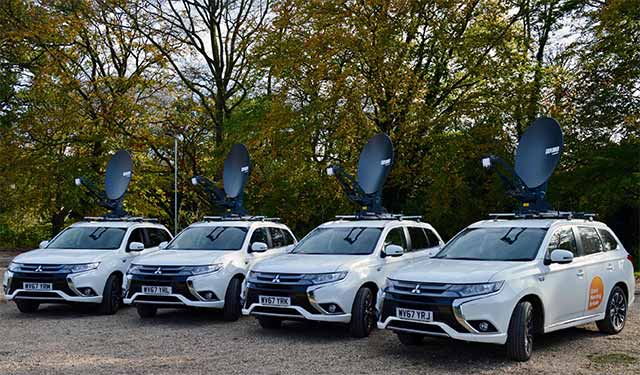 ITV, the UK’s oldest successful commercial television network, is now calling on the best-selling Mitsubishi Outlander PHEV to keep its millions of viewers up-to-date with the latest news and current affairs.

The broadcaster’s ITV Studios Daytime division is using a specially-converted fleet of four as Outside Broadcast (OB) vehicles for its Good Morning Britain and This Morning programmes.

The quartet of Mitsubishi Outlander PHEVs are ITV’s first hybrid vehicles and all have been tailored to its bespoke specification by Mitsubishi Special Vehicle Operations (MSVO) – Mitsubishi Motors in the UK’s specialist, in-house conversion facility.

ITV also believes its new Mitsubishis to be the first vehicles of their size and type to be equipped with an auto-pointing satellite dish, which works to detect and pull an internet signal into the on-board transmission equipment in areas where there is weak or non-existent coverage.

As ITV’s pioneering ‘Sat Car’ concept, which has been made possible due to the versatility of the Mitsubishi Outlander PHEV and new technology making the on-board transmission equipment smaller, the petrol/electric hybrid SUVs replace the traditional diesel ‘Sat Truck’ and, more recently, ‘Sat Van’ that the broadcaster has previously used.

Significantly reducing the carbon footprint of ITV Studios Daytime’s OB vehicles, the Mitsubishis contribute to the broadcaster’s drive to be more environmentally-friendly across all aspects of its business, spanning reusable drink containers right through to the use of low emission vehicles.

As well as the efficiency and environmental benefits of the Mitsubishi Outlander PHEV, ITV opted for the award-winning SUV due to its go-anywhere capability, agility, size, dependability and, importantly, ease-of-use.

From the initial placing of the order to ITV taking delivery of the completed vehicles took only four weeks.

Since its introduction in 2014, the Mitsubishi Outlander has established itself as the UK’s best-selling plug-in hybrid electric vehicle – with over 30,000 examples now on the UK’s roads.