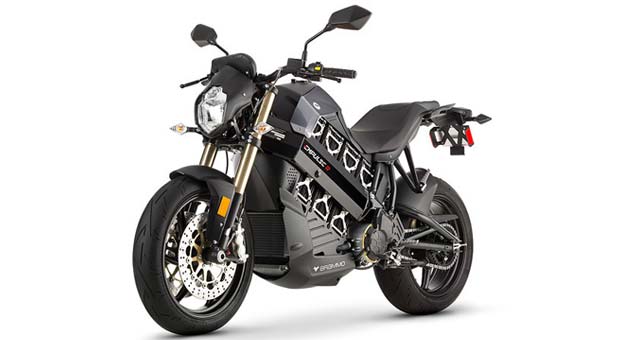 The 2014 Empulse is an evolution of award-winning 2013 Empulse. With its unique water-cooled motor, six-speed gearbox and integrated J1772 rapid charging, the Empulse remains as the market leader in the category.

A top speed of 110mph (177kph) and a 3kW onboard charger means the Brammo Empulse retains its crown as the world’s fastest electric motorcycle in serial production both riding and charging.

The 2014 Empulse embodies many new and improved components, making it an EV technology tour de force. Fully 10lbs of weight is removed from the Empulse, further improving performance, handling, and range.

With the IET integrated 6-speed transmission, the Empulse is able to translate its 90Nm (66 lb-ft) of electric motor torque to over 880Nm (650 ft-lbs) at the rear wheel. That’s enough forward thrust to relegate direct-drive competitors to the rear view mirrors and compel the motorcycling press to compare the substantial performance to that of 650cc twin class motorcycles.

Of course performance isn’t everything, and so the Empulse also boasts an impressive 438 MPGe (MPG electric equivalency) (.54 litre/100km-e) fuel economy, making the Empulse a smart move from a cost-of-ownership perspective as one of the cheapest motorcycles on the planet to refuel.

Charging – Still the only electric motorcycle to offer a 3kW integrated onboard charger, the 2014 Empulse is compatible with nearly 7000 Level 2 public charging stations available in the US, with no extra equipment required. An Empulse owner can charge from 20% to 80% in less than 2 hours using this existing nationwide charging infrastructure. Overnight charges in your garage are no problem either, as the Empulse comes standard with a J1772 charge coupler that plugs into a standard household outlet.

Handlebars – The 2014 Empulse has changed to a tapered aluminum handlebar with oversized clamp diameter. These bars give a better overall riding position and are manufactured by Accossato in Italy specifically for the 2014 Brammo Empulse R.

Tires – 2014 sees a move to new rubber manufactured by Continental. The SportAttack 2 is acknowledged as the best all-round performer. Continental engineers focused on creating a sport bike tire that can provide the best overall quality.

The SportAttack 2 uses a Continuous Compound. This allows Continental to use one single compound throughout the tire but still have different wear and grip characteristics for the center and sides of the tire. During the molding process, the sides and center of the tire are heated at dissimilar temperatures to make the compound softer or harder. This treatment creates a seamless transition from the more flexible sides to the more wear-resistant center.

Colors – Two new colors are introduced to the color palette this year, standard for the Empulse R and optional for the Empulse. In addition to True Blood Red and Eclipsed Black, customers can now select: Maillot Jaune Yellow and Neodymium Silver Metallic.

Bold New Brammo Graphics – The lower body panel now sports a white Brammo logo to make identification even easier for those not yet familiar with the world leader in electric motorcycles.

Global Availability – During 2014 the award-winning Empulse and Empulse R will become available in the United States, Canada, Europe (including the United Kingdom), and in Asia. Brammo’s ever-growing dealer network and service capability ensure that our high levels of customer service will be maintained as the company scales up its international operations.