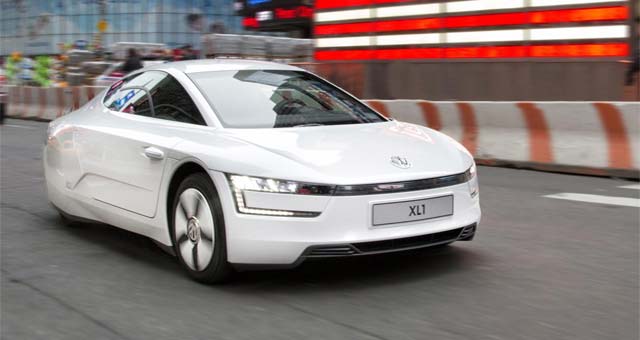 New Yorkers got a glimpse of the future this week, as the Volkswagen XL1 arrived in the City as part of a month-long American tour that took in Los Angeles, Washington D.C., and the Big Apple.

The Volkswagen XL1, which looks like it could have driven off the set of a sci-fi movie, is the most fuel-efficient production car in the world, with a European combined fuel consumption rating of 261 mpg and CO2 emissions of 21 g/km. Thanks to its plug-in hybrid system, this two-seater can also cover up to 31 miles as a zero-emissions electric vehicle.

To achieve this incredible fuel economy, Volkswagen engineers married an incredibly efficient, diesel-electric plug-in hybrid powertrain with a lightweight carbonfiber structure and the best aerodynamics of any production car in the world. The XL1 weighs just 1753 pounds, has a coefficient of drag of just 0.189, and uses a 48-horsepower two-cylinder turbocharged and direct-injection TDI Clean Diesel engine that is mated to a 27-horsepower electric motor, a seven-speed DSG dual-clutch automatic transmission, and a 5.5 kWh lithium-ion battery. Thanks to this formula, this super-efficient Volkswagen can cruise at a constant 62 mph while using just 8.3 horsepower. In all-electric mode, Volkswagen XL1 requires less than 0.1 kWh to cover more than 0.6 miles (one kilometer).

The 261 mpg fuel consumption figure is a record for a production car, showing that Volkswagen is in the automotive industry’s technical vanguard. The XL1 also has a top speed of 99 mph and can accelerate from 0 to 62 mph in 12.7 seconds.

Conceptually, the XL1 represents the third evolutionary stage of Volkswagen’s 1-liter car strategy. At the start of this current millennium, Prof. Dr. Ferdinand Piëch—currently Chairman of the Supervisory Board of Volkswagen AG—formulated the visionary goal of producing a practical car that had a combined fuel consumption of one liter per 100 km (235 mpg). In the two-seat XL1, this vision has become reality.

Despite the tremendous efficiency of the XL1, the engineers and designers successfully came up with a body design that delivers more everyday utility than the two previous prototypes. In the L1, the 1-liter car that was shown in 2002 and 2009, the driver and passenger sat behind each other for optimal aerodynamics; in the XL1, the two occupants sit slightly offset, side by side, almost like a conventional vehicle.