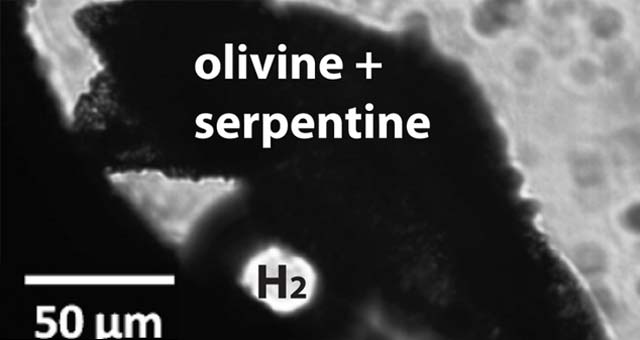 Scientists in Lyon, a French city famed for its cuisine, have discovered a quick-cook recipe for copious volumes of hydrogen.

The breakthrough suggests a better way of producing the hydrogen that propels rockets and energizes battery-like fuel cells. In a few decades, it could even help the world meet key energy needs — without carbon emissions contributing to the greenhouse effect and climate change.

It also has profound implications for the abundance and distribution of life, helping explain astonishingly widespread microbial communities that dine on hydrogen deep beneath the continents and seafloor.

In a microscopic high-pressure cooker called a diamond anvil cell (within a tiny space about as wide as a pencil lead), combine ingredients: aluminum oxide, water, and the mineral olivine.  Set at 200 to 300 degrees Celsius and 2 kilobars pressure — comparable to conditions found at twice the depth of the deepest ocean.  Cook for 24 hours. And voilà.

Dr. Daniel explains that when water meets the ubiquitous mineral olivine under pressure, the rock reacts with oxygen (O) atoms from the H2O, transforming olivine into another mineral, serpentine — characterized by a scaly, green-brown surface appearance like snake skin. The process also leaves hydrogen (H2) molecules divorced from their marriage with oxygen atoms in water.

Finding the reaction completed in the micro space overnight instead of over months as expected left the scientists amazed. The experiments produced H2 some 7 to 50 times faster than the natural “serpentinization” of olivine.

Dr. Daniel noted that until now it has been a scientific mystery how the rock + water + pressure formula produces enough hydrogen to support such an abundance of chemical-loving microbial and other forms of life abounding in the hostile environments of the deep.