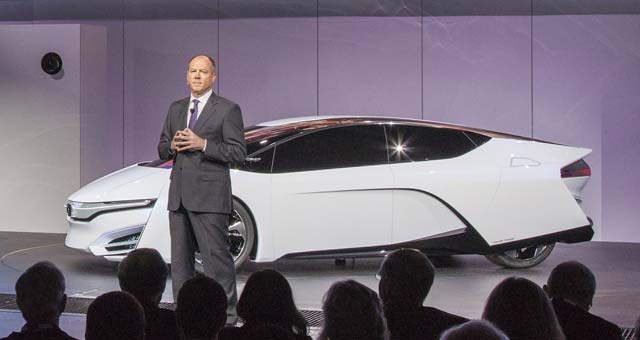 The sleekly styled Honda FCEV Concept made its world debut at the 2013 LA Auto Show.

The Honda FCEV Concept expresses a potential styling direction for Honda’s next-generation fuel-cell vehicle anticipated to launch in the U.S. and Japan in 2015, followed by Europe.

Honda’s next generation fuel cell-electric vehicle launching in 2015 will feature the world’s first application of a fuel-cell powertrain packaged completely in the engine room of the vehicle, allowing for efficiencies in cabin space as well as flexibility in the potential application of FC technology to multiple vehicle types in the future. Significant technological advancements to the fuel-cell stack have yielded more than 100kW of power output.

The power density is now 3kW/L, an increase of 60 percent, with the stack size reduced 33-percent compared to the FCX Clarity.

The next generation Honda FCEV is anticipated to deliver a driving range of more than 300 miles with a quick refueling time of about three minutes at a pressure of 70 MPa.[wzslider height=”400″ lightbox=”true”]

Nov 21, 2013Blagojce Krivevski
Hyundai Tucson Fuel Cell Will Lease For $499 Per MonthHonda Accord Named 2014 Green Car of the Year