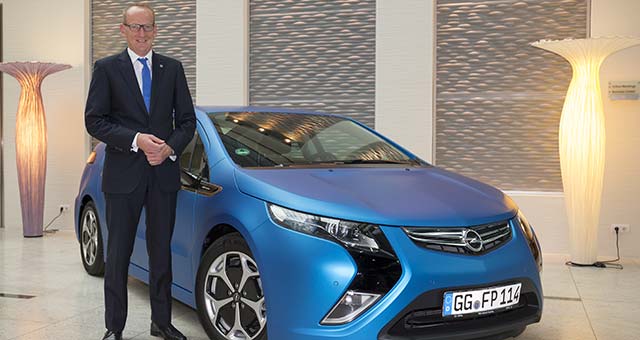 Opel Ampera, the first electric vehicle on the market from a European manufacturer, has been on sale for almost two years and at a current price of 38,300 euros.

The number of electric vehicles in the European market in 2013 is still too low. While their market share has increased slightly over last year, from 0.15 to 0.19 percent, this is still far behind the forecasts of numerous experts.

A total of 7,700 customers have already chosen the trendsetting Opel Ampera. In 2012, it was the best-selling e-car in Europe and was voted Car of the Year by a jury of trade experts. Currently the Opel Ampera is in third place among European e-car registrations with a market share of almost ten percent.

In the Netherlands – Europe’s largest and most important market for electric cars – the Ampera is the undisputed leader with an impressive market share of 40 percent. In Germany – the only major market for electric vehicles in Europe without incentive programs – its market share has grown to a remarkable ten percent, and this upward trend is continuing: since its price was reduced in September 2013 to 38,300 euros, orders have almost doubled – a clear indication of how price-sensitive the electric vehicle market remains.

Customers who opt for an electric car quickly become fans. Owners in Europe have reassessed their approach and the Ampera is increasingly being driven in pure battery-powered mode. This is reflected in fuel consumption figures. In a study in the Netherlands, drivers achieved figures substantially lower than the EU standard fuel consumption level (1.2 liters fuel per 100 km, 27 g/km CO2).

Dutchman Benny van Wijngaarden, for example, covers over 25,000 km annually with his Ampera and uses just 0.9 liters of gasoline per 100 km. However, the Belgian fuel-saving champion is clearly Franky Van Liedekerke, who needs only 0.5 liters per 100 km while covering almost 15,000 km annually. These frugal Ampera owners drive more than three-quarters of their total mileage on pure battery electricity without requiring assistance from the Ampera’s range extender.

The German business world is currently discovering the attractions of the Opel Ampera in a car-sharing project, RUHRAUTOe, led by Prof. Dr. Ferdinand Dudenhöffer of the CAR Institute. The Ampera is the most popular choice among the pool of various electric cars. From a total of 80,000 km driven, RUHRAUTOe users covered more than 50,000 km with the Ampera in almost 700 drives.

With their environmentally aware driving, European Ampera drivers have been able to prevent 13,000 tons of local CO2 emissions entering the atmosphere over the past two years, compared to emissions from conventional cars – a blessing for the environment.