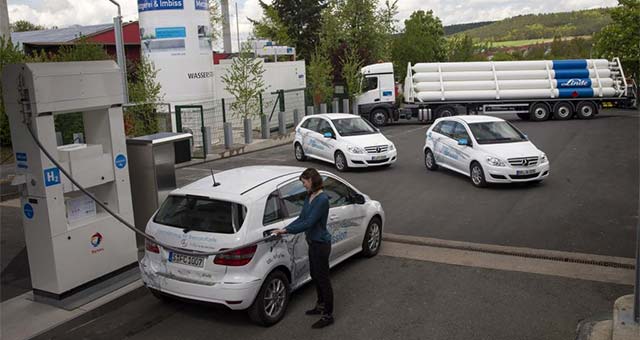 As part of the Clean Energy Partnership (CEP), Daimler, Linde and TOTAL have jointly taken an important step forward in the expansion of Germany’s hydrogen (H2) infrastructure.

The new H2 filling pump at the TOTAL motorway service area in Geiselwind on the A3 between Würzburg and Nuremberg links the existing filling facilities in the metropolitan regions of Frankfurt/Main, Stuttgart and Munich with each other, forming a hub for electric fuel cell vehicles in southern Germany.

In her opening speech, State Secretary Bär said: “Electric vehicles with hydrogen fuel cell drives produce no harmful emissions. They have a long range and can refuel in minutes. Politics, science and industry have worked together to bring hydrogen mobility to the brink of market entry. Together with industry, we have provided a total of 1.4 billion euros for research, development and demonstration projects up until 2016. We are now increasingly tackling the development of infrastructure: by the end of 2015, 50 hydrogen filling stations will be available in metropolitan areas and along major roads. The new filling station in Geiselwind brings us one step closer to this target. The nearly one million euros of funding spent on the construction of this filling station is money well spent because good infrastructure is a prerequisite for this new form of mobility to really catch on!”

TOTAL has invested more than 250,000 euros in Geiselwind and shouldered all construction and approval costs, as well as the project management for installing the hydrogen technology, including service and maintenance components.

With around 90 stations set up in 15 countries, Linde has for many years been a leader in hydrogen technology. It operates the world’s first small-series production facility for hydrogen fuelling stations in Vienna, where Linde uses its proprietary IC90 ionic compressor, which combines advantages in power consumption, maintenance and noise.

The construction of a nationwide hydrogen infrastructure in Germany is accompanied by the planned market ramp-up of fuel cell cars from various manufacturers. The Geiselwind site is part of the expansion plan launched in 2012 that will initially expand the German H2 network from its current 18 locations to 50. With 50 hydrogen filling stations, nationwide mobility between metropolitan areas along the main roads will be possible throughout Germany. Within this expansion programme, the Daimler-Linde initiative is participating in a total of 20 new H2 stations with a total investment of approximately 20 million euros.