FlyKly Smart Wheel Turns Your Ordinary Bike Into An E-Bike 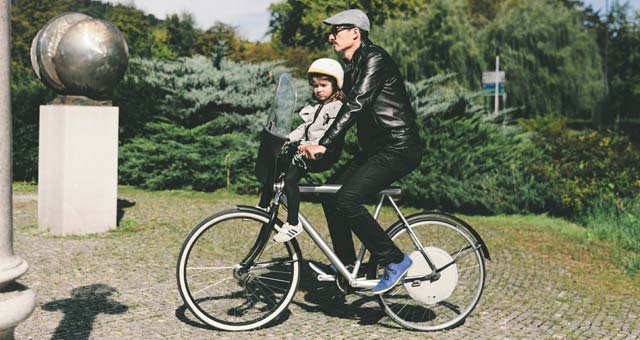 Bike commuting in urban areas has the potential to combat an enormous number of problems like traffic congestion, air pollution and commuting affordability. But bikers are often limited by various constraints, including weather, physical condition, cost and time.

E-Bikes, which have motors attached to them, were meant to solve some of those problems, but often end up being prohibitively expensive.

In an effort to make electric bikes more affordable, New York-based designer Niko Klansek and his team have developed FlyKly – a smart wheel which fits on almost any bike, instantly turning it into an electric one.

The FlyKly smart wheel has a lightweight 250W motor and battery attached to it, will fit “practically any bicycle frame”, and comes in a variety of different sizes and colors.

The FlyKly automatically kicks in when the user starts pedaling, and it stops when the user does. As is the case with conventional electric bikes, this allows riders to pedal with less effort, preventing excessive sweating while riding.

Using the FlyKly app, the motor can be set to a desired top speed for riding. Once the app gets to know your regular cycle routes, it will also be able to suggest quicker and safer routes.

The app is also used for remotely locking and unlocking the smart wheel (and therefore the bike), and GPS tracking in case of theft.

The motor allows for a top speed of 20 mph (32 km/h) with a 30-mile (50 km) range. The Smart Wheel can be charged within a few hours, and even recharges when you cycle downhill.

The FlyKly Smart Wheel only weighs 9 lb (4 kg), so it shouldn’t add too much unnecessary weight to your existing bike set up.

At the moment the Smart Wheel is currently only a prototype. To generate the funds needed to put the wheel into mass production, FlyKly has taken its campaign to the crowdfunding website Kickstarter.

Some e-bike lines’most basic models start above $1200, and can easily surpass $2000. FlyKly is not as expensive — the early bird discount price of $550 is sold out, so it now costs at least $590 to Kickstarter backers.