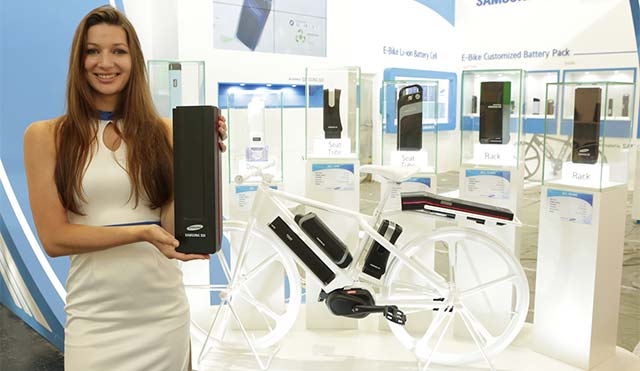 Samsung SDI unveiled an e-bike battery pack that can run for 100 km (62 miles) with a single battery charge.

The South Korean battery maker is participating at the Eurobike 2015 in Friedrichshafen, Germany to showcase its various lithium-ion battery technologies for electric bicycles.

Eurobike is the world’s largest bicycle trade fair that has around 1,300 industry companies from 54 different countries attending each year. Starting from 2012, this year will mark Samsung SDI’s fourth participation.

Samsung SDI will exhibit six types of standardized battery packs that can either be built inside or installed on the outside for immediate use. It will also display 12 types of battery packs that are currently being supplied to global manufacturing companies and the cells of various specifications. Another technology worth noticing is the addition of a Bluetooth function which will enable users to check on their smartphones for residual battery, remaining distance, and other data, while riding their bicycles.

The 500Wh battery pack, unveiled for the first time by Samsung SDI, has achieved its slim size by incorporating high capacity cells and superior battery pack technology. It can also run for a 100km (62 miles) with a single charge by having maximized energy storage.

Recent vitalization of eco-friendly e-bicycle market and higher demand for long distance products – due to the diversification of usage in leisure, commuting, and others – have prompted Samsung SDI to develop its high capacity battery packs.

Samsung SDI also unveiled a battery pack product equipped with 21700 batteries, noted for their upgraded energy capacity compared to previous cylindrical types. The 18650 battery, or rather the small cylindrical battery of 18mm diameter and 65mm length, has been in dominant use until recently. However, the creation of new battery applications has boosted the demand for high capacity batteries. In response, Samsung SDI has come up with a battery that has upgraded a maximum of 35% of energy volume, now known as the 21700 battery, and has successfully applied it onto e-bikes for the first in the world.

The 21700 model can have various applications other than e-bike, such as in electric tools, laptops, and more. It is expected to become the new standard in small cylindrical battery usage.