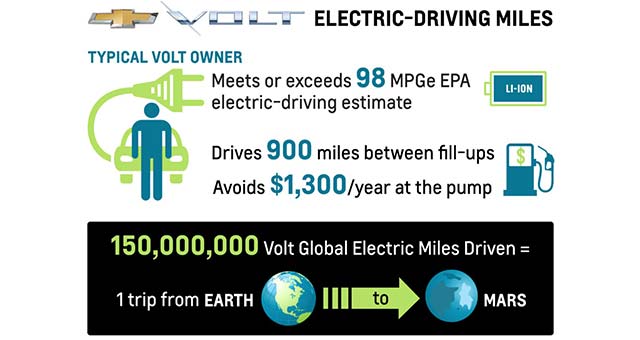 GM says Chevrolet Volt owners are consistently achieving the published EPA-estimated mileage of 98 MPGe gasoline-free miles, and many are even exceeding it.

Their experience contributes to an out worldly total of 150 million electric-powered Chevrolet Volt driving miles – roughly the distance from Earth to Mars.

The typical Volt owner who regularly charges the vehicle is going 900 miles between fill-ups of the gasoline engine that powers the Volt’s on-board generator. That avoids about $1,300 a year at the pump.

MPGe is a measure of the average distance traveled per unit of energy consumed. The EPA uses it to compare the consumption of alternative fuel vehicles, plug-in electric vehicles and other advanced technology vehicles with the fuel economy of conventional internal combustion vehicles expressed as miles per U.S. gallon of gasoline.

Some drivers are all but avoiding gasoline. 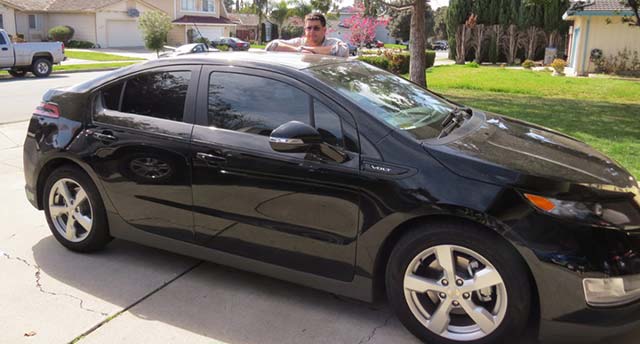 Paul Friday of San Jose, Calif., says he gets about 7,000 miles between fill-ups and adds about three gallons of gas to his Volt every three months.

Volt owners remain the most satisfied of any in the entire industry for the past two years with more than nine in 10 telling a major consumer publication they would buy another Volt.

For the first 38 miles, the Volt can drive gas and tailpipe-emissions free using a full charge of electricity stored in its 16.50-kWh lithium-ion battery. When the Volt’s battery runs low, a gas-powered generator seamlessly operates to extend the driving range up to another 344 miles on a full tank.