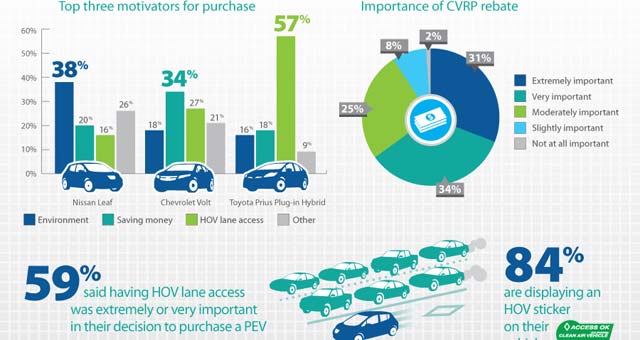 The Plug-in Electric Vehicle Owner Survey is a long-term collaborative research project managed by California Center for Sustainable Energy’s (CCSE), in coordination with the California Air Resources Board and researchers at UT Austin’s Lyndon B. Johnson School of Public Affairs and the UC Davis Institute of Transportation Studies.

Together, the project team is analyzing data from Clean Vehicle Project participants in order to understand trends in the plug-in electric vehicle market, including the drivers of adoption, vehicle use, as well as vehicle charging infrastructure use and satisfaction.

The latest survey of California’s plug-in electric vehicle drivers shows differences in primary purchase motivations from owners of one model to the next. The survey also shows increased satisfaction with public charging options and wider availability of workplace charging.

The current survey covers drivers who have owned their vehicle for at least six months as of March 1, 2013.

Highlights from the survey include:

– Chevy Volt-driving respondents are more than four times as likely to have a level 2 charging station installed at their home than Toyota Prius Plug-In respondents.
– Workplace charging availability is becoming more widespread, 46% of respondents reported access to workplace charging, an increase of 14% from March 2012.
– Of those with access to workplace charging, 74% have access to this charging at no cost to the driver, down from 89% in March 2012.
– Though low, driver satisfaction with public charging infrastructure continues to improve, rising from 17% in March 2012 to 29% in May 2013.
– HOV lane access was an extremely or a very important purchase motivation for 59% of respondents; 84% are displaying the HOV lane access sticker.