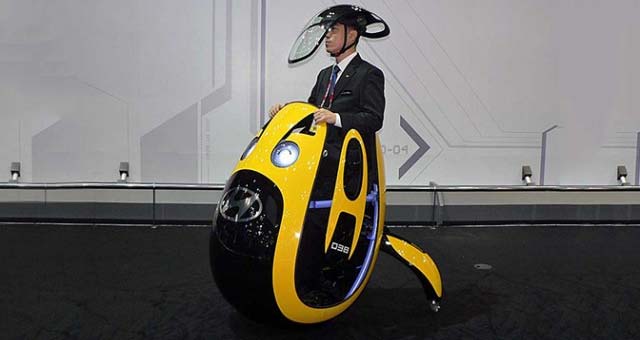 The egg-shaped Hyundai E4U sits on a rotating semi spherical ball that spins horizontally. The semisphere is in a titled position to help generate drive, while two stabilizing wheels located at the rear of the vehicle keep it moving straight.

Two pedals are located inside of the driver’s cockpit which allow the E4U to tilt in a certain way. If the drive ball is tilted to the left, the E4U will move forward as the directional force is applied in such as a way that the ball kicks the ground backwards. To move in reverse, users need to tilt the ball to right, so as to kick the ground backwards.

For the fashion and safety conscious, the top half of the ‘egg car’ can also be detached and worn as an attractive helmet.

In a demo at the car show, the pod moved at about walking speed, according to Japan’s Nikkei Tech-On Web site.