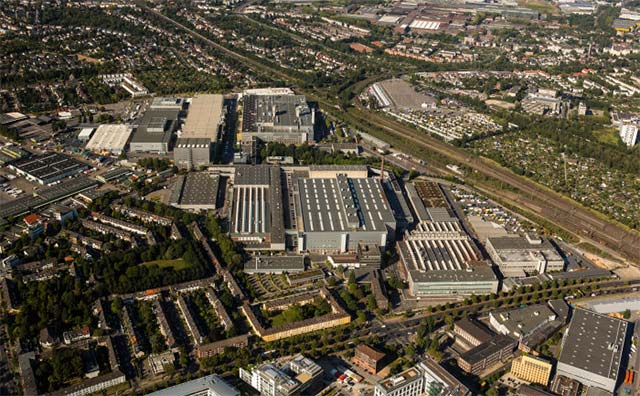 The Mercedes-Benz plant in Dusseldorf is making intensive preparations for the market launch of the next-generation of the Sprinter. The company management and the works council have now agreed that the electric-drive Sprinter will also roll off the production line in Dusseldorf, the lead Sprinter plant worldwide.

Over the next few years Mercedes-Benz Vans will be investing a total of around 150 million euros in electrifying its commercial range, based on the Vito and the Sprinter. The business unit can make use of existing modular construction technologies deployed by Mercedes-Benz Cars and benefit from economies of scale.

At the Dusseldorf plant around 300 million euros are being invested in the production of the next-generation Sprinter. The relevant employees are undergoing training to prepare for work on the electric Sprinter and other technological developments. The company and the works council have also agreed to carry out measures to increase flexible working and boost efficiency.

The Dusseldorf plant is currently making intensive preparations for the start of production of the next-generation Sprinter. Substantial restructuring and modernisation is already underway.

The first major commercial customer for electric vans from Mercedes-Benz has already been confirmed: as Mercedes-Benz Vans and trading and logistics provider Hermes announced a few weeks ago, Hermes Germany will, as part of a strategic partnership, be deploying 1500 Mercedes-Benz electric vans for its parcel deliveries in the coming years – including vehicles from the Sprinter model series.

“Our Dusseldorf Sprinter plant is an outstanding success story. Well over four million vans manufactured in 55 years, a pivotal role as the lead plant for the worldwide Sprinter production, cutting-edge facilities and processes and benchmark quality – the facts speak for themselves,” states Frank Klein, Head of Operations at Mercedes-Benz Vans. “We are now beginning a new chapter in the Dusseldorf Sprinter story. Electric drive systems are a key technology when it comes to urban transport – especially in the commercial environment. Our far-sighted agreement that the new electric-drive Sprinter will roll of the production line here is a hugely significant one. We are ensuring the long-term prospects of our Sprinter plant and helping to make it futureproof.”

Dr Armin Willy, Site and Production Manager at the Mercedes-Benz plant in Dusseldorf, adds: “I am delighted that, together with the works council, we have reached this forward-looking agreement to produce the electric Sprinter in Dusseldorf. As the lead Sprinter plant, we have proven our flexibility and technical expertise again and again over the years. Now we are taking another step towards future mobility and expanding our diversity when it comes to drive systems too. We in Dusseldorf are to become the competence centre for the Sprinter with electric drive.”

Helmut Stengel, Chair of the Works Council at the Mercedes-Benz plant in Dusseldorf: “For the works council and the workforce at the Dusseldorf site it is important that the electric Sprinter is integrated into the production alongside the conventional vehicles. The agreement is a decisive milestone in the ongoing development of our site thanks to new technologies, and sets our Sprinter plant on course for a successful future.

Mercedes-Benz Sprinter “made in Dusseldorf” since 1995

At the beginning of the 1960s, the company, at that time Daimler-Benz AG, took over the Dusseldorf plant from Auto Union. The manufacture of Mercedes-Benz vans began in Dusseldorf on 1 April 1962.

The Mercedes-Benz Sprinter has been produced in Dusseldorf since 1995. Shortly after its launch, annual production broke the 100,000-van barrier for the first time, with record after record being broken ever since. In 2015, the Sprinter celebrated its 20th birthday in Dusseldorf and also by far the most successful year in its history. In 2016 the large van followed on seamlessly from this record level with a total of around 193,400 units sold worldwide.

Mercedes-Benz Vans manufactures the Sprinter at a total of six plants around the entire globe. It is available in over 130 countries and has now sold well over three million units, making the Sprinter one of the most successful commercial vehicles of all time and a best-seller in the Daimler product portfolio.