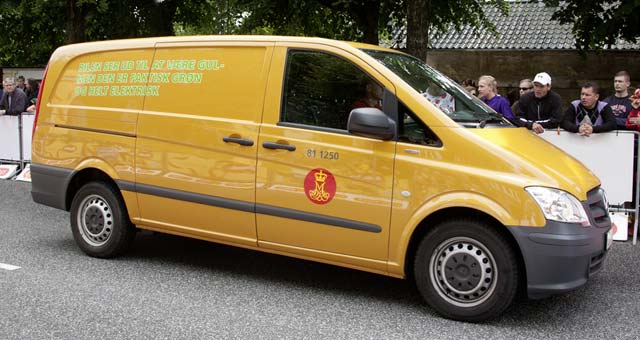 This is the largest order for Vito E-CELL panel vans in Europe to date.

Denmark was one of seven target markets in Europe chosen by Mercedes-Benz Vans to test the Vito E-CELL in the early days of its introduction to the market. In the meantime these electric vans, available in panel van and crewbus versions, are available in over 15 European markets.

The pilot operation with Post Danmark began on the island of Bornholm with three vehicles in mid-2011. A crucial factor for the decision in favour of the Mercedes-Benz Vito E-CELL was the combination of the advantages of a classic van with those of a state-of-the-art electric drive system. Highlighted in this context were its sophisticated powertrain engineering, its powerful lithium-ion battery and its above-average performance figures in respect of drivability and load capacity.

The Vito E-CELL’s electric motor delivers 60 kW and produces a torque of 280 Nm. The lithium-ion battery with an overall capacity of 36 kWh is well protected underneath the load compartment floor. The load compartment, which can be utilized without restrictions of any sort, can accept a payload of up to 850 kilograms. The vehicle’s top speed is limited to 89 km/h (55 mph). This benefits the van’s range, 130 kilometers (80 miles) according to NEDC (New European Drive Cycle), which is ample to meet the requirement profile of the Danish postal services since the new electric vans “made by Mercedes-Benz” are intended for short delivery rounds (with numerous stops in between) in the larger Danish cities.

The Vito E-CELL’s dynamic and agile drive is thanks to a permanent-magnet electric motor (output 60 kW, torque: 280 Nm), power electronics, a transformer and a battery recharger with an output of 6.6 kW located under the bonnet. Power is transmitted to the front wheels. The batteries of the Vito E-CELL are recharged in a maximum of five hours from a 380/400V mains connection. Recuperation feeds the battery additionally during the journey.

For the success of electricity-based technology for commercial vehicles to become sustainable, the determining factor in the long term will be their economic efficiency. Thanks to its complete independence from fuel, electric drive technology has a significant role to play here in terms of its overall economic efficiency over the period of operation.