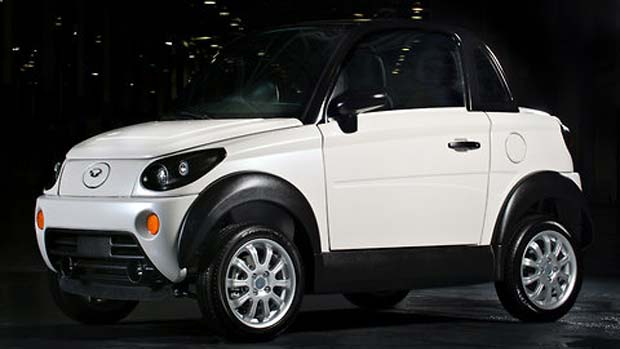 With an expected base price of $15,500, MyCar will be considerably less expensive than other all-electric vehicles. GTA also plans to manufacture a larger MyCar EV beginning in 2014. GTA says that future models, including the MyCar EV planned for early 2014, will also be competitively priced.

MyCar is about the size of the smart fortwo electric drive and goes as far as 115 miles (185 kilometers) per charge. The car is a ‘neighborhood electric vehicle’ for urban commuters, which means it can’t be used on highways. Due to regulatory restrictions MyCar has a top speed set for 25 mph (40 km/h) in the U.S. and 45 mph (72 km/h) in Europe.

GreenTech said that Domino’s Pizza Inc. is the first U.S. customer for its MyCar EVs. The company initially expects at least 20 Domino’s franchise owners to place orders for its MyCar. The orders would follow an agreement with Greenabout A/S, a Danish distributor of electric cars, for “thousands” of the two-passenger vehicles.

GreenTech Automotive purchased Hong Kong-based EuAuto in 2010 and relocated the company’s operations and manufacturing to the United States.

GTA projects it will create 426 direct jobs by 2014, and an independent analysis by Evans, Carroll & Associates Inc. found that GTA’s operations would create more than 7,400 direct, indirect and induced jobs by 2014. As of July 2012, GTA had more than 840 employees enterprise-wide, and the company is on track to employ more than 900 people by the end of 2012.