La Poste Group And Renault Pursue Their Cooperation On Eco-Mobility 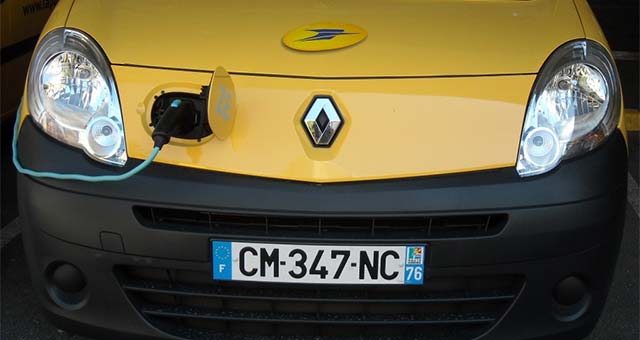 Since the launch of France’s low-carbon vehicle project in January 2009, La Poste group, which has the country’s largest industrial fleet with some 69,000 vehicles, has equipped itself with a complete range of electric vehicles, including small light commercial vehicles, quads, three-wheelers and electrically assisted bicycles.

Today, La Poste mailmen and mailwomen use nearly 25,000 means of electric transport daily. The keys to the 5,000th Kangoo Z.E. were handed over by Philippe Wahl, Chairman and Chief Executive Officer of La Poste group, and Carlos Ghosn, Chairman and Chief Executive Officer of the Renault group, to mailperson Vivien Malungu at the Issy les Moulineaux mail platform south of Paris.

The Renault group and La Poste group are working together in a wide range of fields on forward-looking issues independently of their business relations. By signing the new partnership agreement, the two French companies are pursuing their collaborative efforts on the search for eco-mobility solutions. Through research work and studies, the two groups will develop pilot projects on new mobility solutions and continue to foster the sustainable mobility of the present and future, focusing on four main areas:

– Improving vehicle range to accelerate rollout
The two companies plan to dialogue and share information on their tests and study programs to improve the range of the clean vehicles produced by Renault that are currently part of the La Poste fleet. R&D projects have already been initiated in this area. The “MobilHyTest” range extension falls within the scope of today’s partnership.

– Making vehicles used in urban areas cleaner
Current projects concern research into solutions for parcel delivery needs in urban, peri-urban and rural areas for 5 m3 to 17 m3 vehicles. A key player in urban logistics, La Poste every day tackles the same equation of meeting the growing demands arising from e-commerce by delivering parcels in city centers while limiting the harmful impacts stemming from traffic and parking. The aim is to generate solutions for a cleaner and quieter urban logistics better adapted to its environment, and also to improve the working conditions of mail delivery and collection staff.

– Working on different sizes of electric vehicles
The two groups will conduct a watch, carry out tests, and dialogue on new vehicles measuring up to 17 m3 for mail use and in respect of competition law. Several new ideas have already emerged, including in the 8 m3 segment, the “service” vehicle segment and the small urban vehicle segment.

– Contributing to future road mobility with the advent of connected vehicles
Through their collaborative work, Renault and La Poste are making an active contribution to the development of connected and communicating light commercial vehicles by 2020, as well as to their management and monitoring in professional contexts.

5,000 electric cars
With a range of up to 70 km in optimal mail use, a load volume of 3 m3 or 4 m3 depending on the model, zero CO2 emissions and a pleasant and silent drive, these vehicles are perfectly adapted to 100% responsible mail routes. The commitment of La Poste and its mailmen and mailwomen is underscored by the environmental message “+ proche + vert” (“closer and greener”) marked on each vehicle. The vehicles are built for La Poste by Renault.

1,000 electric quads
The electric quad is poised to replace motorized two-wheelers and, in some cases, internal-combustion four-wheelers. It will be used in particular in cities and suburbs as well as in pedestrian areas closed to internal-combustion vehicles. The vehicle has a range of around 25 km and can transport up to 150 kg of mail and parcels. The vehicles are built for La Poste by Ligier.

Two in three bicycle mailpersons are equipped with an electrically assisted bicycle. The bicycles are built for La Poste by Cycleurop and Arcade (France).

100 STABY electric three-wheelers
STABY, the latest addition to La Poste’s electric vehicle fleet, is used to deliver and collect mail and small goods in city centers and peri-urban and rural areas. The vehicle has a range of 35 km in mail use and can transport nearly twice as many letters and parcels as a scooter. Highly maneuverable and easy to drive, it is also more stable and safer to use than a two-wheeler, which it is set to replace. These vehicles are built for La Poste by Ligier.

To capitalize on all the expertise acquired in the field, La Poste has created MOBIGREEN, a subsidiary dedicated to promoting eco-driving with all the players concerned by this type of training, including managers of company fleets, large companies and local authorities.