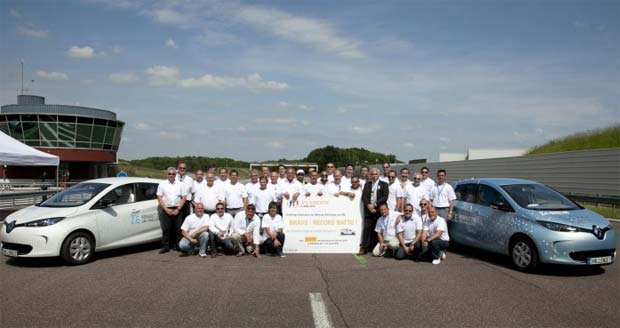 Renault ZOE has set a new world record for the longest distance travelled in 24 hours by a production electric car, during a marathon relay in Normandy, France, in early June.

The record-breaking drive took place on June-1 on the speed ring at the Aubevoye technical centre (CTA) in Normandy with two of the Renault ZOE electric cars setting out at 4:00 pm local time.

For this performance, Renault ZOE was able to take advantage of a major technological breakthrough: the Caméléon charger. This original world-first system makes ZOE compatible with any socket and any power level. ZOE was therefore able to be fast-charged at 43 kW, regaining 80% of battery capacity in under thirty minutes.

Over the 24 hour period, the ZOE setting the new record was fast charged 18 times.[wzslider height=”400″ lightbox=”true”]