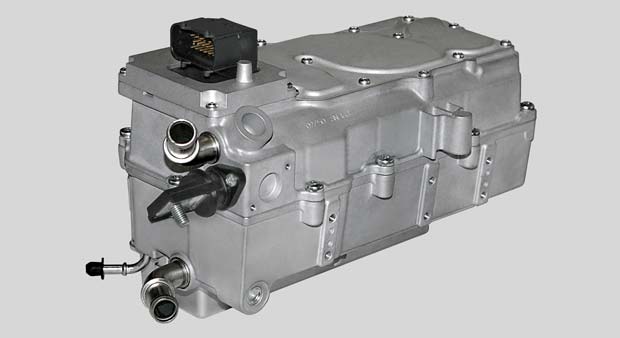 Smaller, lighter, and more powerful – those are the attributes that characterize the latest generation of power electronics, developed by the international automotive supplier Continental for electric drive train applications.

In figures, the highly integrated module has a continuous power of 20 kilowatts at a weight of only eight kilograms and just five liters of space. Mass and volume are about 33 percent less than in the previous generation. This was possible due to the integration of two modules: The inverter and the DC-DC converter are now assembled in a single housing.

The engineers designed the control device to be modular and scalable right from the start. Modifying just a few components is all that is necessary to adapt the device to a large variety of applications. For example, the same concept is used in the Full Hybrid vehicle Audi Q5 Hybrid and also in purely electric vehicles.

Power electronics: key components in electric vehicles
Many discussions about electric cars are focused on batteries. This is understandable since one of the primary development targets is to extend the electric driving range.

It is obvious from the wide assortment of functions that the power electronics has an effect on the efficiency of the entire electric drivetrain. Continental continues to refine this core component, especially with regard to weight, space, and cost.

Technology leader in electric mobility
Continental was the first European supplier to manufacture hybrid systems on a mass scale, and has been doing so since 2003. In addition to power electronics, the second generation of which is seeing duty in hybrids and electric cars today, the company has been mass producing externally excited synchronous motors that do not require rare earth minerals. Continental was the world’s first supplier of Li-Ion batteries for mass-produced cars in 2008 and the story continues. Continental and South Korea’s SK Innovation made a general agreement beginning 2012 to foster the joint development, manufacturing, and marketing of Lithium Ion batteries. Continental has also recently been awarded the “Gelber Engel “ award by German automobile club ADAC in the category Innovation and Environment, for introducing a new kind of electrical storage device for convenient Start-Stop operation.