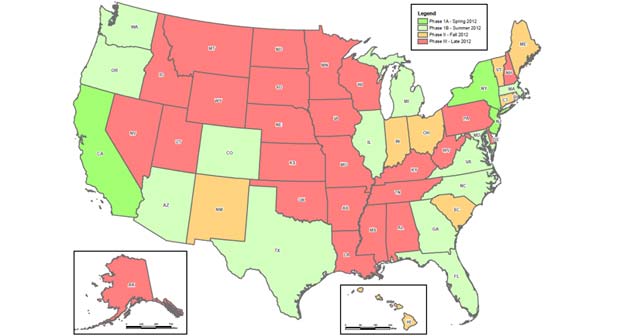 Ford Motor Company announced that it has certified the first dealers that will sell the company’s first all-electric car – the Ford Focus Electric – America’s most fuel-efficient five-seater.

The 67 dealers are in California, New York and New Jersey –markets that account for a large percentage of electrified vehicle sales and will begin seeing the Focus Electric later this spring. By the end of the year, Ford Focus Electric will be available nationwide.

Certification means the dealerships have met the automaker’s guidelines for dealers selling electric vehicles – including installation of at least two onsite charging stations and participation in highly specialized training in the field of electric vehicles.

First, however, they had to satisfy a list of other requirements to become certified, including:

– Installing at least two electric car charging stations, one available to the public the other in the service area

Focus Electric has been certified by the EPA to offer 110 MPGe in the city and 105 MPGe combined, beating Nissan Leaf by 6 MPGe.

After first being available in California, New York and New Jersey, Focus Electric will be available in 19 markets across the U.S. by summer’s end, nationwide by the end of the year.

May 1, 2012Blagojce Krivevski
Continental Makes Electric Cars Even More EfficientMore Than 380m Two-Wheel Electric Vehicles Will Be Sold in Asia Pacific Through 2018