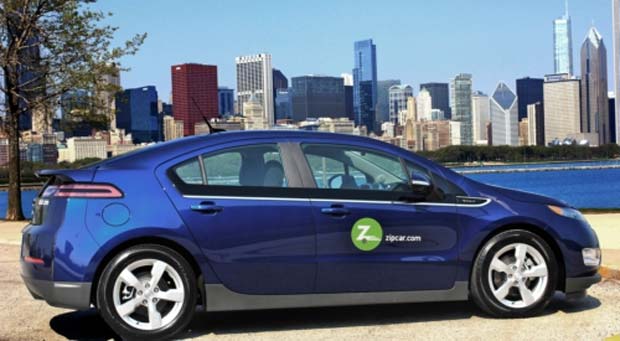 Zipcar announced the launch of the company’s first large-scale electric vehicle pilot program in Chicago in which five Chevrolet Volt EVs will be available to members by the hour, with up to 20 additional electric vehicles to be added into the Chicago fleet during the course of 2012.

The new Zipcar EVs will be placed in pods located throughout the city, including locations on the University of Illinois at Chicago campus, as well as in the Loop, South Loop, River North, Gold Coast, Streeterville, Lincoln Park, and Albany Park.

Zipcar says it is working with a number of partners on this program, including 350Green, which is installing the EV charging stations where the Zipcar EVs will be located.  Other partners include the Chicago Transit Authority (CTA), Tishman Speyer, LAZ Parking and Cityfront Place Apartments, all of which are providing locations for the Zipcar EVs and charging stations in commercial and residential buildings, private parking lots and along the CTA rail system.

The first electric vehicles to join the Zipcar Chicago fleet are five Chevrolet Volts, which are now available at Cityfront Place Apartments 400 N. McClurg Ct. and 260 E. Chestnut St. in Streeterville, 210 N. Wells St. in the Loop, and in University Village at the University of Illinois-Chicago at 915 S. Paulina St. and 701 W. Maxwell St.  These vehicles are available for reservation by Zipcar members starting from just $10 per hour.

The Chevrolet Volt is an electric vehicle with extended range, which can travel gas-free up to an EPA-estimated 35 miles, after which it shifts a gas generator which produces electricity to keep it going an additional 375 miles on a full tank of gas. Because many trips taken by Zipcar members are fewer than 35 miles, these trips taken in the Volts will be powered solely by electricity rather than fuel.

Zipcar is working with the City of Chicago and the Chicago Area Clean Cities Coalition to launch the EV program in support of the Chicago Climate Action Plan.  Over the course of 2012, the City of Chicago is installing hundreds of electric vehicle charging stations for public use to help expand the EV infrastructure throughout the city.  Along with this effort, the Zipcar EV program will help provide increased access to EVs and emission-free driving to car sharing members throughout the Chicago community.

Zipcar has been a pioneer in using advanced vehicle technologies, being the first car sharing company in the United States to introduce electric vehicles into its fleet with the launch of Toyota RAV4 EVs in Boston in 2002, and the first to offer hybrid vehicles in Seattle in 2003.