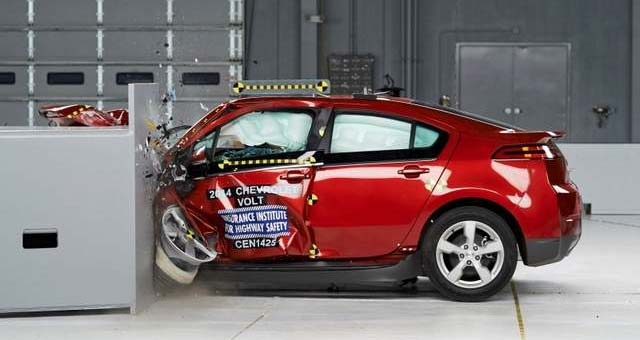 The 2014 Chevrolet Volt with available Forward Collision Alert was the only vehicle out of 12 small cars tested to earn the Insurance Institute for Highway Safety’s 2014 Top Safety Pick + award.

The results in the most recent round of testing put it ahead of its competitors, both in the electric and small car segments.

Only one small car out of 12 — BMW’s Mini Cooper Countryman — earned a “good” rating earning from the Insurance Institute for Highway Safety in its latest round of tough, new front-end crash testing.

According to IIHS, the small overlap front crash test is considered the most difficult of any of the head-on tests performed by either the National Highway Traffic Safety Administration or the IIHS. It was introduced in 2012, and replicates a collision with another object, such as a tree, on the very front corner of the vehicle at 40 mph. This means the vehicle’s front bumpers and crumple zones are avoided, making the rest of the car distribute crash energy.

In 2011, the Chevrolet Volt and Nissan Leaf were the first plug-in electric models to undergo IIHS crash test evaluations — and both earned top ratings in the moderate overlap front, side, head restraint and roof-strength evaluations.

But both faced challenges with the newest test.

“Electric vehicles have a unique challenge in the small overlap test because of their heavy batteries. The Volt performed reasonably well, earning an acceptable rating, while the Leaf struggled,” Nolan said.

Driver space in the Volt was “maintained reasonably well in the test, and injury measures taken from the dummy indicate a low risk of any significant injuries to a person in a similar crash,” IIHS said.

In the Leaf, the dummy had significant damage. The instrument panel, parking brake pedal and steering column were pushed toward the driver. Injuries to the left knee and left lower leg would be likely in a crash of this severity, and injuries to the left thigh would be possible.

Nissan said in a statement it will review results “as we seek opportunities for improvement.” 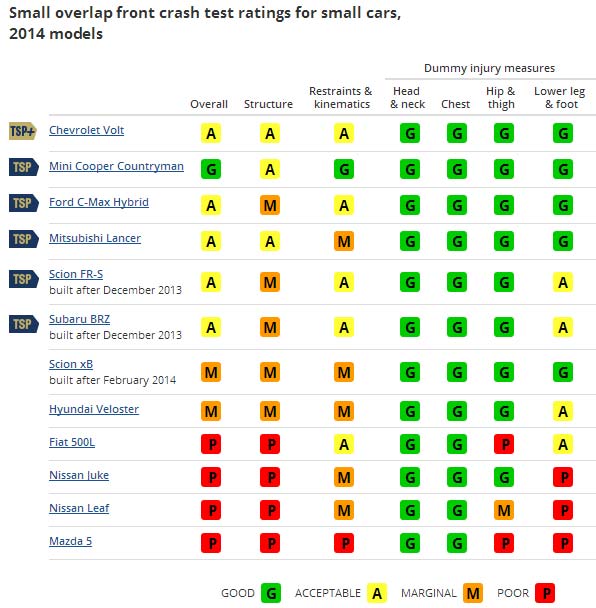 Jul 30, 2014Blagojce Krivevski
GM Teams Up With EV Industry For A Better GridPlugShare Teams Up With Nissan for 'No Charge to Charge' Program