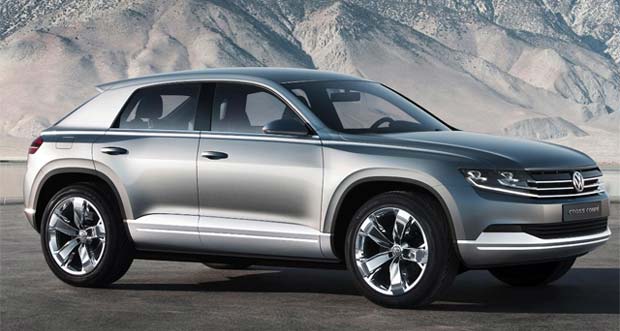 Volkswagen is showcasing its concept of an SUV of the future at the 2011 Tokyo Motor Show this week, in the shape of the Cross Coupe.

The all-wheel drive plug-in hybrid hints at how a crossover between a four-door coupe and an SUV could look.

It also defines a new stage in Volkswagen engineering design, being the first model based on the company’s new ‘modular transverse matrix’ – or MQB – to be shown publicly.

At 4,345 mm, the concept car being shown in Tokyo is longer than a Golf and shorter than a Tiguan. The width of 1,868 mm and height of 1,523 mm also come exactly in between these two bestsellers, meaning that the Cross Coupe’s dimensions place it at the heart of the globally in-demand A segment.

The concept car’s 2,630 mm wheelbase is very long in relation to its overall length (52 mm longer than the Golf and 26 mm longer than the Tiguan). The overhangs (855 mm at the front and 860 mm at the back) are correspondingly short. This gives the car a very compact but dynamic appearance, which is emphasized by wide tracks widths of 1,585 mm (front) and 1,613 mm (rear).

It’s not just coupé-like though: off-road, it possesses figures that almost fall into the range of classic SUVs. The front angle of approach, for example, is 24.2 degrees and at the rear 32.5 degrees. The Cross Coupe also features good off-road ground clearance.

The design of the car – penned by a team led by Volkswagen Group Chief Designer Walter de Silva and Brand Design Chief, Klaus Bischoff – features the characteristic horizontal lines of the Volkswagen ‘face’ at the front while linking to the future with a completely new light and grille treatment. The rear is dominated by steeply sloping angles and new distinctive light clusters which are combined with SUV-like chunky bumpers and twin tailpipes.

The four-seat Cross Coupe is powered by two electric motors (one front and one rear) which generate 40 kW / 180 Nm of torque and 85 kW / 270 Nm respectively, and a TSI direct injection turbo petrol engine. With overall power of 265 PS, the Cross Coupe can accelerate to 62 mph in just seven seconds and on to a top speed of 125 mph. It can travel up to 25 miles on purely electric power.

The all-wheel drive system with ‘electric drive shaft’ also represents an innovation for Volkswagen, with the rear axle being driven by the rear electric motor.  In this situation power is supplied to the rear electric motor by the one at the front, which during this phase acts as a generator powered by the TSI engine. This means that in the Cross Coupe, the flow of electrical energy thus replaces the conventional transfer of power by means of a drive shaft – which creates room in the central tunnel (which would usually house the drive shaft) to hold the lithium ion battery. The resulting low position of the battery and layout of the drive systems give the vehicle a very low centre of gravity and a balanced spread of axle loading, endowing the car with dynamic coupe-like handling qualities.[wzslider height=”400″ lightbox=”true”]