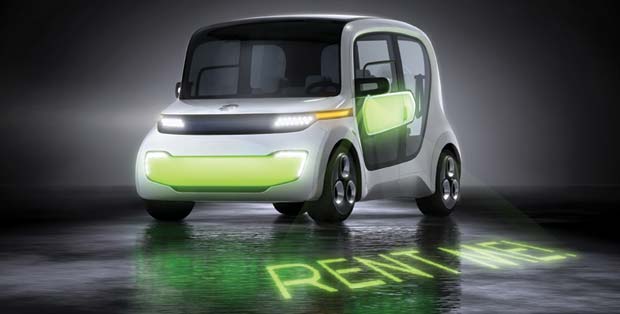 This EDAG Light Car Sharing concept follows in the footsteps of the Light Car concept EDAG brought to the Geneva Motor Show two years ago.

Compared to the previous versions of the model, the Light Car Sharing Concept has received a new body, as well as a more advanced drive train system. The vehicle body is made of fiber composites and plastic parts. The plastic can be used to display messages on the area near the car.

Powering the EDAG Light Car Sharing Concept is an axle-mounted electric drive system powered by lithium-ion batteries with a range of around 62 miles (100 km) and a top speed of 62 mph (100 km/h).

Besides the two side doors with simple sliding windows, the EDAG Light Car Sharing, which can seat up to six passengers, also has a rear entry. The generously proportioned twin rear doors provide easy access to the six folding seats inside the car. The seats are in two rows of three, and arranged back-to-back. This centrally arranged seating position is on the same level as the B-pillar, and also has structural properties, whilst at the same time being lighter than conventional, individual seats.

More details of the EDAG Light Car Sharing Concept will be revealed at the 2011 Geneva Motor Show on March 1.