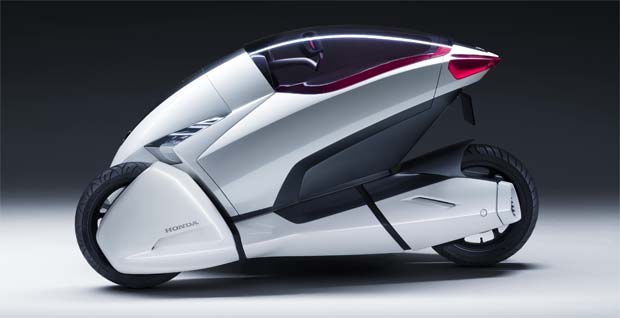 Honda has revealed the 3R-C three-wheel electric concept car, which will make its debut at Geneva Motor Show next week.

The 3-RC electric three-wheeler shows what a future minimal urban transport vehicle for one person might look like, Honda said. The battery electric drivetrain is mounted low in the three wheeled chassis, therefore keeping the centre of gravity low and thus improving stability.

The 3R-C has a clear canopy that covers the driver’s seat while it is parked and not in use. When 3R-C vehicle is in motion, the canopy becomes an enveloping wind-shield that provides the pilot, who sits low in the vehicle, with significant protection from the bodywork and doors.

The high sides of the safety shell seat give greater safety to the occupant, reducing the threat from side impacts and improving weather protection. In front of the driver is a lockable boot area, which gives significant secure storage for luggage or other items. The 3R-C’s designers created a flexible cover that surrounds the upper torso to reduce exposure to bad weather and improving comfort.

The 3R-C study was created by European designers working at Honda’s Research and Design facility in Milan.

Also on display will be the EV-N concept, previously shown at the Tokyo Motor Show.

The EV-N shows the potential application of battery technology in a small, stylish city car.

A design study that evokes the spirit of the diminutive 1967 N360 city car, the EV-N features Honda’s own solar panels in the roof, which could charge the car while it is parked. Two of Honda’s U3-X, electric personal mobility devices are attached to the inside of each door. The two-door EV-N concept is envisioned with a Lithium ion battery pack, and small electric motor for predominantly urban use.[wzslider height=”400″ lightbox=”true”]