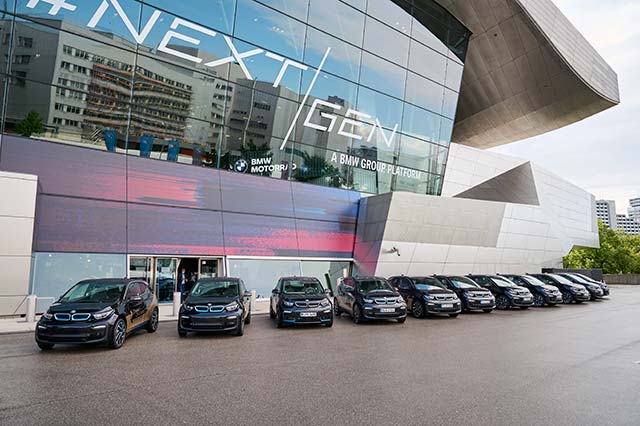 Vehicle-to-grid (V2G) EV charging is being tested by BMW customers as part of a three-year initiative that allows drivers to charge their cars as usual while also returning energy to the power grid as needed.

The first vehicles for the customer pilot phase were handed over to their users at BMW Welt on 9 July. This means that customers are now in possession of 20 BMW i3 cars equipped with the new technology, with a further 30 due to be delivered to business users in the coming weeks.

The “Bidirectional Charging Management – BCM” consortium research project launched in May 2019 brings together companies and institutions from the automotive, charging infrastructure, energy and scientific sectors. They have teamed up to develop technological solutions for making electric mobility even easier and cheaper for users, with even lower emissions.

By adopting a holistic approach, the project aims to interlink vehicles, charging infrastructure and power grids for the first time in a way that facilitates the use of renewable energy – and at the same time increases power supply reliability. The research project will run for three years under the aegis of the German Aero-space Centre and with funding from the German Federal Ministry for Economic Affairs and Energy.

Start of testing under everyday conditions
Not only will electric vehicles with bidirectional charging capability be able to draw electrical power for their high-voltage battery when plugged into a compatible charging station or wallbox, they will also have the ability to reverse the process and feed energy back into the distribution network operator’s power grid. This will effectively turn the electric vehicles’ batteries into mobile energy storage devices that can also supply electricity when required. Integrating as many electric vehicles as possible into the power grid in this way calls for myriad innovations in terms of vehicle technology, charging hardware, charging management, communication interfaces with energy sector stakeholders and legal parameters.

Bringing about these advances is the task of the research project, in which the BMW Group is acting as consortium leader. It is joined by KOSTAL Industrie Elektrik GmbH (development of charging hardware), KEO GmbH (software provider for connecting the customers systems with energy suppliers), transmission network operator TenneT and distribution network operator Bayernwerk Netz GmbH (both energy system services), the Research Institute for Energy and Research Association for Energy e.V. (both FfE research into energy system and grid repercussions as well as measurement data evaluation), the Karlsruhe Institute of Technology (KIT; research into electricity market and grid repercussions) and the University of Passau (user research).

The pilot customers will now be the first to benefit from this new technology package. It essentially consists of the in-vehicle and backend technology (BMW), the intelligent wallbox (KOSTAL) and the networking for interconnecting the electric car, wallbox and electrical installation in the customer’s building with the power grid (Bayernwerk, KEO and TenneT). The first effect of this that impacts customers directly will be the maximisation of energy generated from their own photovoltaic system in their consumption pattern, resulting in a sizeable reduction in electricity costs.

This will be supplemented in a second stage by vehicle-to-grid (V2G) functionality, meaning that customers will engage in new business models for energy trading and power grid stabilisation. Stage three will extend the trial to customers with fleets of electric cars, who will use their vehicles as short-term storage devices for eliminating power consumption peaks in the daily load cycle.

The task of harmonising interaction between the individual components and both existing and future communication standards – to ensure seamless overall functioning – proved to be the main technical challenge when devising this package. The vehicle development methods and processes built up by the BMW Group and the unwavering commitment of all project partners enabled the successful integration of such an intricate multi-stakeholder system, including testing and validation.

Test phase for B2B customers via Alphabet
The first B2B customers are also among the test users for the pilot phase. They were enlisted for the project with the assistance of Alphabet Fuhrparkmanagement GmbH, a wholly owned subsidiary of the BMW Group.

Alphabet has been helping customers electrify their vehicle fleets since 2013. The company uses its total e-mobility solution AlphaElectric to provide support for customers throughout the entire electrification process – from a needs analysis and creation of a suitable model strategy, through to implementation of charging solutions and intelligent billing options. The portfolio of services also includes providing additional advice on how to draw up an appropriate eCar Policy, for example, or optimum charging and load management. In addition, customers can also lease charging solutions through Alphabet.

Expanding electric mobility enhances power supply reliability
As the number of electric vehicles on our roads continues to expand, the amount of electric power required is going to increase in the long term. At the same time, there will be a growing need to control energy flows intelligently as this is the only way of making optimum use of electricity from renewable sources.

In response to this challenge, the BMW Group teamed up with power grid operator TenneT to develop an innovative solution as part of a preparatory project in Germany that allows the charging strategy for electric vehicles to factor in the customer’s mobility schedule, the availability of green electricity and the current load on the power grid. The intelligence required for local networking is supplied by Bayernwerk and KEO.

In practice, this means plugged-in vehicles can suspend and later resume charging when prompted by signals from the distribution or transmission network operator. The bidirectional charging technology (for backfeeding power) now being explored could lead to even greater benefits. Indeed, it allows parked electric vehicles hooked up to a charging station or wallbox to be used as flexible, mobile energy storage devices.

During periods of particularly high demand for electricity, these vehicles are able to feed additional power into the grid, while their high-voltage batteries are mainly charged at times when electricity from renewable sources is available or overall demand is lower. And the stored energy can, in turn, be deployed exactly when needed, whether for electric driving or boosting power grid capacity.

Bidirectional charging assists the energy revolution. As well as improving power supply reliability, intelligently controlled integration of electric vehicles into the power grid can also further increase the proportion of renewable energy in Germany’s overall electricity consumption. By utilising the storage capacities made available in the high-voltage batteries of electrified vehicles, supply and demand for green power can be reconciled more effectively.

In this way, the batteries in electric vehicles can be used to effectively absorb the peaks in wind and solar power generation, for example, and then release the stored renewable energy again at times of low renewable power generation (night, still weather), while always making allowance for the customer’s driving requirements. This can reduce the need to ramp up power generation at fossil fuel power stations and increase their emissions during such periods, adding further depth to the role of electric mobility as an intrinsic element of the energy revolution. Its continued spread serves to lower CO2 emissions both from mobility-related sources and when generating electricity.

All-encompassing approach
Nowhere else beyond the BCM project has such an all-encompassing approach been adopted. All the relevant elements and variables for normal operation down the line are being considered from a holistic perspective and aligned. This means the interaction between the charging hardware in the vehicle and at the charging point, the accompanying digital services, plus the role of the networks at all levels.

The legal and regulatory parameters will also be evaluated during the pilot phase. As far as the domestic use of bidirectional charging management by customers is concerned (“vehicle to home” or V2H), the project partners have released an initial position paper showing that V2H is already allowed for by current German legislation. Analyses are now being carried out of the potential network- and market-oriented uses under today’s regulatory framework.

Focussing on value for the customer
The University of Passau (user research), Research Institute for Energy (FfE) and Research Association for Energy (both energy system analysis) and the Karlsruhe Institute of Technology (KIT; research into electricity market and grid repercussions) are evaluating the financial and ecological benefits for customers along with the user-friendliness of the specific bidirectional use cases.

This will create a platform for subsequently implementing the technology across the board and so integrate electric mobility into Germany’s power grid.