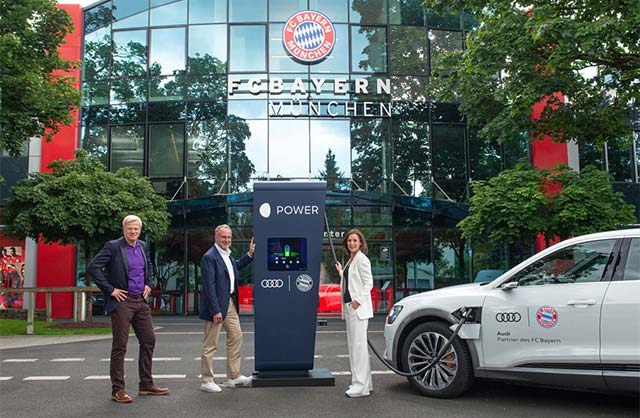 An electrifying partnership: The training grounds of FC Bayern Munich are getting ready for the Audi e-tron.

The charging points are to go online in late summer – just in time for the start of the next Bundesliga season, from which point the professional soccer players of FC Bayern will be driving the Audi e-tron, the brand’s first fully electric SUV.

The record-holding players and their team will be able to charge their future electric cars with up to 150 kilowatts in the underground garage at the home of FC Bayern on Säbener Strasse. At the start of next year, Audi also wants to equip the Allianz Arena in Munich with charging points – fans and visitors to the stadium will then also benefit from them.

Back in January, FC Bayern Munich and Audi announced that they were extending their partnership until 2029. In the next few years, both partners want to work together strategically on innovative marketing campaigns and electrification in particular. More than half of FC Bayern’s Audi fleet will be electrified as of the fall. This will allow FC Bayern to lower its fleet emissions to less than 95 grams of CO2 per kilometer for the start of the Bundesliga season, making an important contribution toward sustainability. This meets the statutory requirement for manufacturer fleets, which applies as of January 2021.