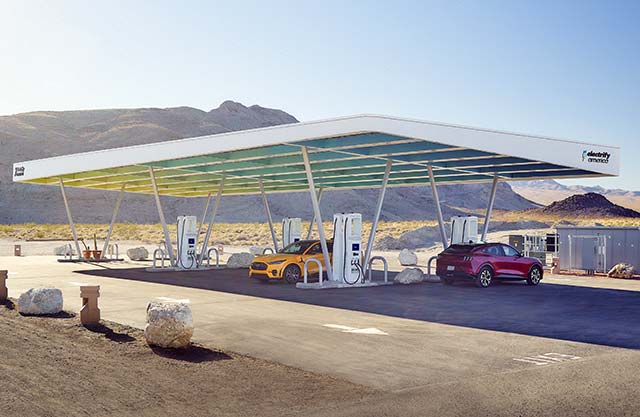 Electrify America has marked an exciting milestone, with 600 public ultra-fast electric vehicle charging stations across the continental United States open to the public in less than three years.

“With our rapid station deployment, we are on track to have 800 charging stations with about 3,500 chargers open or under development by the end of this year – delivering on our commitment to make EV driving easier and more accessible,” said Giovanni Palazzo, president and chief executive officer, Electrify America. “We’re proud to be on the forefront of expanding the nation’s EV charging infrastructure and are excited to see our continued growth, as we help meet EV demand and climate priorities set by the Administration.”

Building on this momentum, the charging company today announced that it will be adding stations in Hawaii, South Dakota, Wyoming and Vermont to the network for the first time by early 2022, bringing Electrify America’s presence to 47 U.S. states and the District of Columbia.

Additionally, Electrify America will open more stations later this year in Montana, Minnesota and New Hampshire – states with a smaller charging station presence – as the network grows in the Plains, Mountain and New England regions. The company is also planning a significant expansion later this year in Washington state, where the legislature has recently passed a bill setting a goal that all model year 2030 and later light-duty vehicles sold, purchased or registered in the state be EVs.

The 600th station achievement follows the completion of two cross-country and two coastal routes in 2020, empowering EV drivers to take interstate trips with confidence. The network’s continued growth is helping provide more options for cross-country travel, particularly with the recent opening of key locations in Quartzsite and Kingman, Arizona.

With more than 600 stations now available for public use, long distance EV travel is becoming more seamless than ever on Electrify America’s network – as stations are strategically located near highway and metro sites with convenient amenities like shopping, banking and dining.